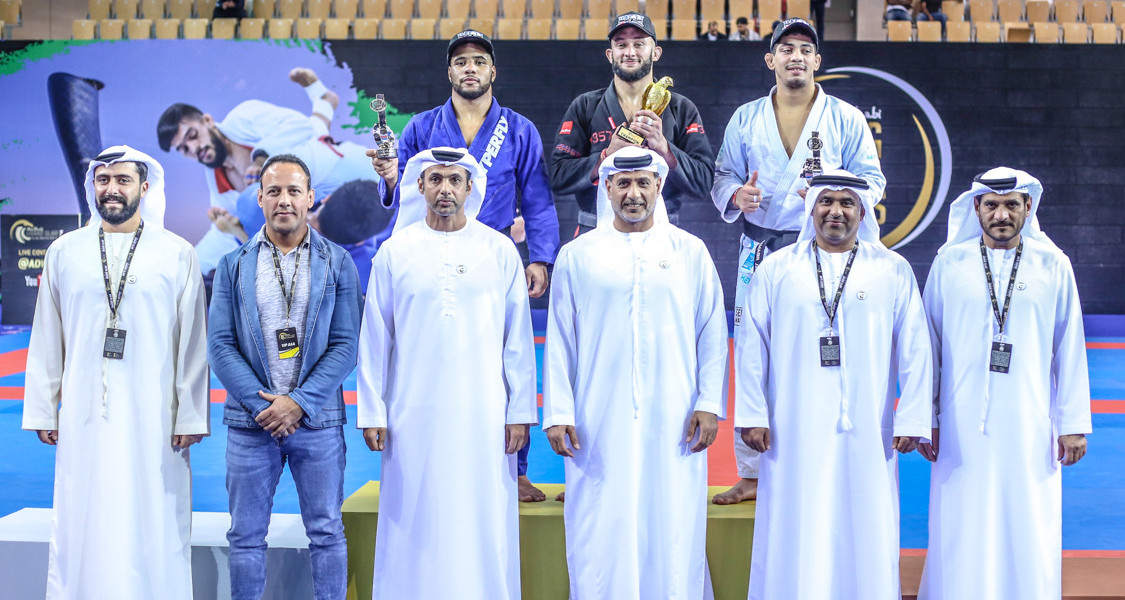 The best for last. The middleweight bracket of the Abu Dhabi King of Mats closed the program at the Abu Dhabi Grand Slam Jiu-Jitsu World Tour, this Saturday, January 12, in Abu Dhabi, UAE. Ten of the best middleweight athletes in the world competed against each other to settle who would be crowned.

Brazil's Gabriel Arges had an impressive performance and secured the title with 5 wins in 6 matches. Isaque Bahiense finished second and Manuel Ribamar finished third to complete the podium. Here's how the bracket played out in a thrilling day of Jiu-Jitsu.

Gabriel Arges opened group A with a tough battle against Norway's Espen Mathiesen. Arges eventually found an opening to take Espen's back and finish with a choke. In the second match of the first round, Rudson Mateus took little time to finish Caio Caetano with an armbar from the 50/50 guard.

In the second round, Gabriel Arges did his best but could not fight off Lucas Barbosa's pressure. The Atos JJ athlete managed a guard pass and won 3-0. Espen Mathiesen recovered from his first round loss with a choke from the back on Caio Caetano.

Rudson Mateus and Espen Mathiesen opened round 4 and two sweeps secured Rudson the win with a 4-0 lead. Caio Caetano did not return to compete in this round, securing Lucas Barbosa a win via WO.

Isaque Bahiense and Roberto Satoshi were the first on the mat. One sweep was enough for Bahiense to beat Satoshi 2-0. Manuel Ribamar debuted with style, finishing Diego Ramalho with an armbar.

DJ Jackson debuted on the second round with a wrist lock finish on Roberto Satoshi. The round completed with Isaque Bahiense winning his second match via referee decision over Manuel Ribamar after a 0-0 tie on points.

DJ was back on the mat on round 3 to beat Diego Ramalho 1-0 on advantages in a very tough match. Manuel Ribamar did not have to compete in this round, as Roberto Satoshi could not fight due to injury, securing Ribamar a WO win.

Isaque Bahiense opened round 4 on fire, catching Diego Ramalho with a beautiful bow and arrow choke. The round completed with Manuel Ribamar outscoring DJ Jackson 9-0 with a back take.

Round 5 saw Diego Ramalho beating Roberto Satoshi via WO and Isaque Bahiense securing his fourth win with a referees decision victory over DJ Jackson after a 0-0 tie on points. With this results, Isaque and Ribamar advanced to the semifinals.

Gabriel Arges squared off with Manuel Ribamar for a spot in the gold medal match. In very tough six minutes, Arges was able to sweep two times against one by Ribamar. The 4-2 score was enough to secure the chance to fight for the title.

In the second semifinal, Isaque Bahiense and Rudson Mateus gave all they had to advance to the final. A 1-0 lead on advantages following a 2-2 tie on points was the edge that took Isaque to the gold medal match.

Manuel Ribamar secured the third place with a WO win over an einjured Rudson Mateus.

The battle for the gold medal was thrilling from beginning to end. Both competitors showed a lot of respect for their opponent but also a lot of drive to win. The definition came in the final minute, when Arges was able to secure a back mount to score 4 points and take the 6-2 lead over Bahiense to the end. The middleweight division has a new king.

The Abu Dhabi Grand Slam World Tour returns for the final leg of the 2018/2019 season on March 9-10, in London, England. The registration period is already open. Click here for more info. Follow the complete coverage on Instagram @ADWJJT.