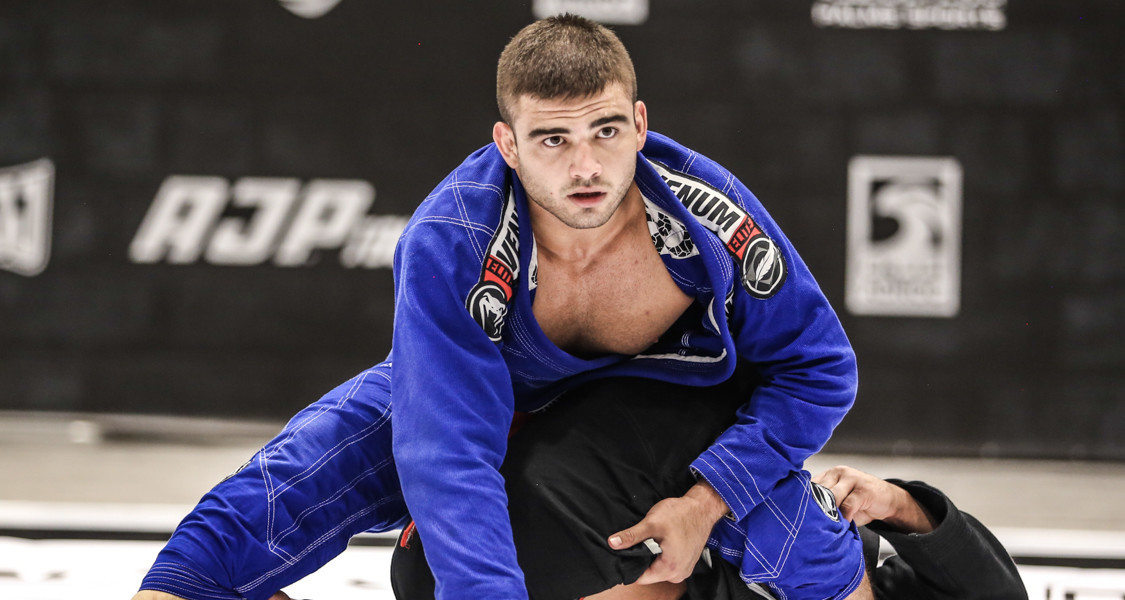 The middleweight division of the Abu Dhabi King of Mats has yet another belt contender. Brazil's Gustavo Batista fought his way through a very tough bracket this Saturday, September 14, for a chance to compete for the ADKOM division belt. In five matches, Gustavo managed two submissions as he imposed his top pressure game on all his opponents. Under the guidance of Atos Jiu-Jitsu's leader Andre Galvão, Batista had an impressive performance. He was pleased with the outcome of his campaign: “I was very well prepared and I was able to make my game work. The final with Isaque Bahiense was a very tough match, but thank God I was able to come out with the win. Now I will wait to see who I am going to face for the belt. I want that belt!” Here's how the bracket played out this Saturday, at the Felix Center, in Azusa.

Norway's Tommy Langaker hit the ground running to catch Diego Ramalho with an armbar and open group A with a win by submission. Gustavo Batista closed round 1 on group A with a dominant performance against Marcos Tinoco to build a 14-0 lead and take the win by points.

On Group B, Manuel Ribamar was able to upset fan favorite Isaque Bahiense with a very strategic game that led to a 1-1 tie on advantages and a split referees decision win. In another close match, round 1 on Group B closed with Sweden's Max Lindblad beating American Nathan Mendelsohn 1-0 on advantages.

Marcos Tinoco came back from his losing debut to catch Diego Ramalho with a foot lock on Group A. The group closed round 2 with Gustavo Batista being able to score a 1-0 lead on advantages over Tommy Langaker for his second victory in the bracket.

On Group B, Isaque Bahiense bounced back from a loss on round 1 to catch Nathan Mendelsohn with an armbar. Max Lindblad closed round 2 with a 8-6 lead on points over Manuel Ribamar to reach his second victory in the bracket.

The final round on the group stage was a nonstop nail-biter. On Group A, Marcos Tinoco secured his spot in the semifinals with a narrow referees decision win over Tommy Langaker following a 2-2 tie on points. Gustavo Batista also made it to the semifinals with a third win in three matches. He closed his group stage campaign on Group A with a choke from the back finish on Diego Ramalho.

On Group B, Isaque Bahiense made it to the semifinals with a 2-1 lead on advantages over Max Lindblad. The second match in the group could have put Manuel Ribamar in the semifinals, but he was unable to finish Nathan Mendelsohn and settled for a 2-0 win on points, leaving the second spot in the semifinals to Lindblad.

Batista wasted no time in establishing control over the match. He quickly worked his way to Lindblad's back and found his grips to sink in a bow and arrow choke that left the Swedish opponent no other option than to tap.

In a very close match. Tinoco gave Bahiense all kinds of troubles and only a 1-0 lead on advantages was the narrow edge that put Isaque in the final after a thrilling six minutes of Jiu-Jitsu went by.

Tinoco crowned his brilliant campaign in Los Angeles with a savage finish on Lindblad to secure his spot in the podium. The weapon of choice was an intense foot lock that made Lindblad scream for the tap and be unable to step on that foot after the match was over.

The two finalists were the favorites to be in the title match and they confirmed the crowd expectations. Also as expected, the final was a very tough and close match decided by details. Batista played his top game and was able to score a 2-0 lead with a sweep early in the match. He held on against Isaque's own sweep attempts and as the clock ran out was able to celebrate his title.

The Abu Dhabi Grand Slam Los Angeles returns this Sunday, September 15, with the final day of competitions. Follow the complete coverage on Instagram, at @ajptour and @jjwplus. Watch the matches live at ajptour.com.