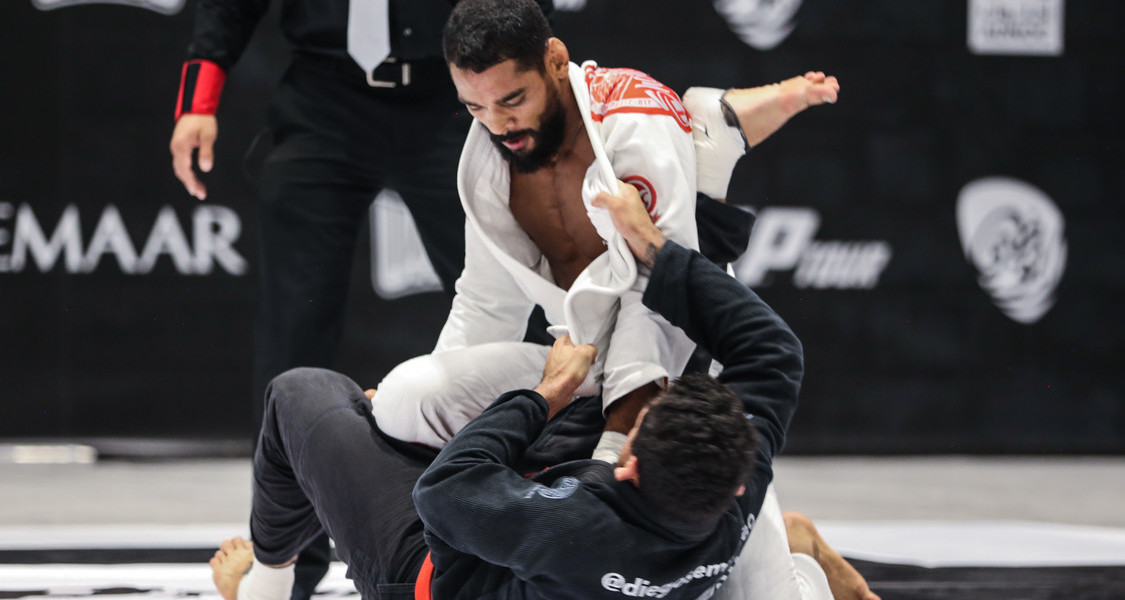 Once again, the black belt division was the highlight of the day at the Abu Dhabi Grand Slam Los Angeles, this Sunday, September 15. The skills bar was set up high for those willing to reach the top spot of the podium. At the end of the day, the black belt division saw illustrious returns to the game as well as talented newcomers who wrote their name in ADGS history. Here's how each weight class played out until the champions were crowned.

The champion is back. First, Gabriel Sousa had the chance to get back at Jonas Andrade after the defeat at the ADGS Tokyo final. A 2-0 lead on advantages was the narrow edge that took Gabriel to the final. On the other side of the bracket, Cleber Fernandes fought twice to reach the gold medal match. He first finished João Figueiredo and then beat Hiago George 2-0. In the final, Gabriel waged an all out war against Cleber that ended with a tie and a split referees decision in favor of Gabriel, who now has two gold medals in three ADGS events in the season.

In a crowded bracket, both finalists had to work hard to get a chance to compete for the gold medal. Israel Almeida beat Jonathan Van Buren 15-0 to meet Lee Ting and win with a 6-2 lead. In the semifinal, Israel beat Thiago Macedo 3-0 on advantages. On the other side of the bracket, ADGS Moscow champion Diego “Pato” Batista first beat Alberto Serrano 4-2 and then repeated the score against Rafael Mansur in the semifinals. In the gold medal match, a late sweep by Pato granted him the two points that settled the score in 4-2 for the Cicero Costha athlete, who is now a 2X black belt champion in the 2019/2020 ADGS season.

With the bracket filled with talent, the finalists had no shortcuts on their way to the title. Defending his hegemony after wins in Moscow and Tokyo, Diego Ramalho first beat Nathan Cheung 2-0 and then Caio Caetano by a narrow 2-0 lead on advantages in the semifinals. Jaime Canuto also fought twice on his way to the gold medal match. He beat Victor Silvério 2-0 on advantages and then waged war against new talent Johnata Alves, wining by a narrow 2-0 lead on advantages. The final was a nail-biter and Canuto managed a near guard pass in the very end to put the score at 2-1 on advantages and secure the title.

No rest for the finalists in the division. Manuel Filho debuted with a 3-0 lead on advantages to beat upcoming talent Ronaldo Junior. Then, he faced Jose Luna in the semifinal and was able to build a 2-0 lead on points to secure his spot in the gold medal match. Marcos Tinoco fought once to make it to the final, beating Mauricio Neto 1-0 on penalties. In the final, Filho fought until the very end to secure the title. A near sweep was the movement that granted him a second advantage and the 2-1 score that made Manuel Filho the champion.

With the usual suspects out of the mix, new talent took over the division. Fernando Reis fought twice to reach the final, first finishing Renato Tagliari and then beating Hygor Brito by referee decision following a close match. On the other side of the bracket, Fellipe Trovo also had his hands full with a 3-2 win on advantages over Anton Minenko and a triangle choke submission on Wellington Modena. In the final, Reis and Trovo kept things close, including the 4-4 tie on the scoreboard. After the final whistle, all three judges pointed Reis as the champion.

In another star-studded division, Ricardo Evangelista and Gerard Labinski fought their way to the final through very tough matches. Labinski beat Gustavo Dias with a toehold finish while Evangelista was able to build a 8-4 lead on Victor Hugo Martins. In the final, Ricardo fought accordingly to a well set strategy and built a 4-2 lead over Labinski that secured him the title.

Mayssa Bastos was a big favorite to maintain her domain over the division, but along came a brown belt called Brenda Larissa. Mayssa fought once to reach the final and as usual caught her opponent with a choke from the back. Kimberly Anderson was the victim this time. On the other side of the bracket, Larissa beat Ni Ni Hoang 9-2 to reach the gold medal match. In the final, Brenda scored an advantage early and then kept her cool to hold off Mayssa until the clock ran out. The division has a new champion.

In an exciting bracket, Anna Rodrigues fought twice to reach the final. She beat ADGS Tokyo champion Hope Douglass 2-0 and met up with Amanda Nogueira in the semifinal. She secured her spot in the final via referee decision. Amal Amjahid finished Elina Moestan with a bow and arrow choke to reach the final. In the gold medal match, Amal and Anna were very careful all throughout the final. After a 0-0 tie on points, Anna secured the title via referees decision.

Luiza Monteiro went back in the mix to fight once and secure her spot in the final. She beat Janaina Menezes 2-0 and then got an Walk Over win over Nicole Sullivan. On the other side of the bracket, Italy's Margot Ciccarelli beat Natalie Van Hamersveld 4-2 on points and then caught Kayla Patterson with a triangle choke in the semifinals. In the final, Luiza went right to work and quickly built a 7-2 lead, which she secured it until the end to claim the gold medal.

The champion is back. Winner of four out of five ADGS events in the 2018/2019 season, Thamara Silva went back in after seating out in Moscow and Tokyo. She made it to the final with a 7-2 win over Woods Heather and then an armbar finish on Sarah Draht in the semifinals. On the other side of the bracket, Gabrielle McComb first finished ADGS Tokyo champion Martina Gramenius with a choke from the back and then caught Emilly Silva with a triangle choke in the semifinals. In the gold medal match, Thamara wasted no time and found an armbar to tap McComb and take back her place at the top of the podium.

Gabrieli Pessanha was touched by luck as both opponents on her side of the bracket forfeited the competition, allowing her to get to the final without breaking a sweat. On the other side, the USA's Kendall Reusing had to take the long route to the final. She first beat Rafaela Ribeiro 2-0 and then met up with fellow American Kim Bowser, winning with a 2-0 lead on points. In the final, Gabi and Kendall played safe and respected each other's games a lot. After a 0-0 tie on points, the referees decided in favor of Gabi, who stays at the top of the division with another gold medal.

Relive the thrills of another awesome edition of the Abu Dhabi Grand Slam Los Angeles with our complete coverage on Instagram at @ajptour and @jjwplus. Find the complete results here. The Abu Dhabi Grand Slam Tour now moves south for the 4th stop in the 2019/2020 season. Rio de Janeiro will host the ADGS on November 1-3, 2019. The registration period is already open. Secure your spot in what has become one of the highlights in the Jiu-Jitsu calendar in Brazil. Click here for more info.