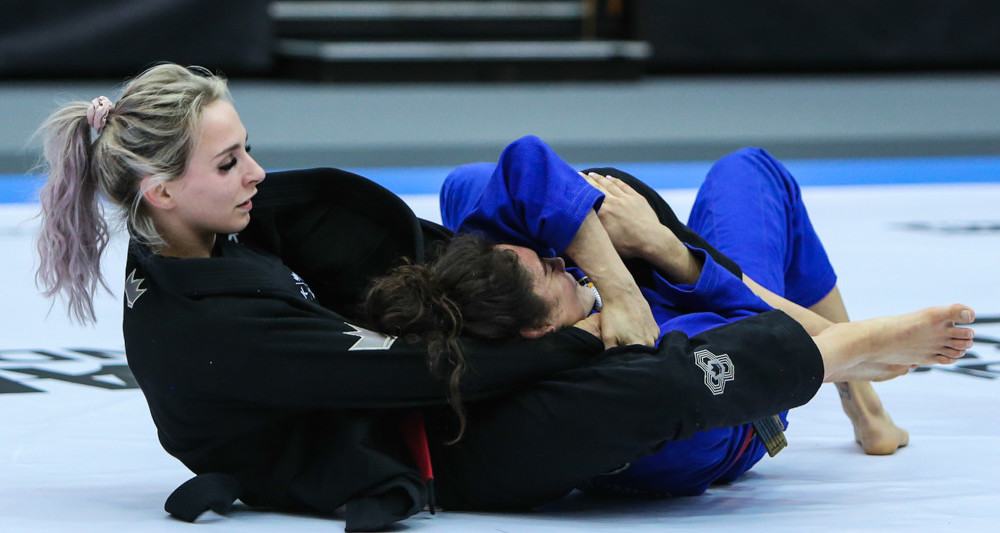 The 2019/2020 season of the Abu Dhabi Grand Slam Tour is in the books. After 10 months, six cities, thousands of matches and tens of thousands of competitors from all over the planet, the grand finale took place this weekend of March 7-8, in London, England. Once again, the Copper Box Arena, at the Queen Elizabeth Olympic Park, was home for some of the best competitors in the world. For two full days of action, they awed the crowd on the stands and at home with top notch performances. The adult black belt division for men and the adult brown/black belt division for women were once again the highlight of the program. Here's how each weight class played out.

Each finalist fought once to be in the gold medal match. Lucas Feitosa caught Frederico Guimarães with a choke from the back. On the other side of the bracket, Francisco Jonas Andrade caught Kalel Santos with a toehold. In the final, Jonas was able to quickly make his guard game work and finish Feitosa with a triangle choke. In the bronze medal bracket, Kalel Santos beat Frederico Guimarães for the third place.

Igor Terreco fought twice to be in the final. He beat Gabriel Frenham 11-7 and then beat Alexis Alduncin via referee decision following a 6-6 tie. Diego Pato made it to the gold medal match with a toehold finish on Hiago George in the semifinals. The title was decided by a 6-4 lead in favor of Pato, who was able to control Terreco in a sweep battle during the entire five minutes of the final match. In the bronze medal bracket, Hiago George beat Gabriel Frenham and Lucas Silva for the third place.

Gabriel built his campaign to the final with a 1-0 win over France's Haidar Abbas and a 9-4 lead over Bahrain's Ali Monfaradi. Thiago Macedo also fought twice on his way to the gold medal match. He finished Tyrone Elliot and outscored Marcus Phelan 5-1 in the semifinals. The final was played safely by both competitors, as they avoided making mistakes. In the end, after a 0-0 tie on points, the referees saw Gabriel as the winner and division champion. In the bronze medal bracket, Ali Monfaradi beat Tyrone Elliot and Haidar Abbas for the third place.

In the most crowded bracket of the day, Natan Chueng fought three times to get to the final. He first beat Adrian Kozicz 4-2, then outscored Larman Leon 2-1 and finally beat Igor Verissimo 3-0 in the semifinals. Sweden's Max Lindblad debuted with a 8-0 win over Alan Rodrigues, followed by a narrow 7-6 lead on Diego Ramalho and finally a 2-1 win over Pedro Neto. The final was a tough battle between two tough competitors. Max was able to sustain the 3-2 lead to the end and celebrate the title. In the bronze medal bracket, Diego Ramalho beat Lucas Silva, Igor Verissimo and Pedro Neto for the third place.

Poland's Jakub Zajkowski made it to the final in three matches. He first beat Bradley Hill 2-1, then was gifted with an WO win over Ruben Lemos. In the semifinal, Jakub beat Brazil's Julio Junior by submission. On the other side of the bracket, Jamie Paxman debuted finishing Spain's Daniel de Souza and followed with a 3-2 win over Bruno Lima, from Portugal. The final featured new faces, but competent ones. Jakub made good use of his long legs and caught Jamie in a triangle choke to secure the gold medal. In the bronze medal bracket, Renato Cardoso beat Daniel de Souza, Julio Junior and Gilvan Costa for the third place.

Jackson Sousa made it to the final with a 9-0 win over Poland's Michal Lapka followed by a 9-4 win over Finland's Santieri Lilius. Adam Wardzinski was merciless on the other side of the bracket, as he beat Croatia's Luka Skoric 25-1 and made it to the final with a 9-0 lead over Russia's Stanislav Varshavskiy. The final between the two teammates was a serious affair. Wardzinski built a 5-4 lead to maintain his post as the weight class champion in the last two events. In the bronze medal bracket, Santieri Lilius beat Pedro Elias and Stanislav Varshavskiy for the third place.

The finalists fought once to secure their spots in the gold medal match. Argentina's Eliana Carauni beat Poland's Martyna Iwat 5-1 and Brazil's Brenda Larissa outscored Italy's Serena Gabrielli 9-6. The final was a Jiu-Jitsu version of a true Brazil vs. Argentina “Super Classico”. Brenda took the opportunity to go ahead 2-0 and sustained the lead until the end to beat Eliana and take the gold medal home, her second in the season. In the bronze medal bracket, Serena Gabrielli beat Brenda Dang and Thushara Amendra for the third place.

Ana Rodrigues debuted on her way to the final with a 2-0 win over Vanessa English. After that, she beat Gabriela Fetcher via referee decision in the semifinals. Talita Alencar first beat France's Helene Lo 13-1 and then beat Rose Al Sharouni 5-1 in the semifinal. The gold medal match was tense and fought to the very last second. Ana was able to score twice in the final moments to beat Talita 2-1 and win her fourth gold medal of the season. In the bronze medal bracket, Gabriela Fetcher beat Weronika Nitecka and Rose El Sharouni for the third place.

Norway's Julia Maele first beat Carolina Carriello 5-0. In the semifinals, she beat Greece's Zafeiria Panagiotarakou 11-0. On the other side, Ffion Davies fought once and caught American Alexa Yanes with a choke from the back. The gold medal match saw Ffion take the initiative early to build a 7-0 lead with a guard pass and mount. Maele was fierce but could not come back in the scoreboard. Gold for Ffion. In the bronze medal bracket, Zafeiria Panagiotarakou beat Monika Markowska and Alexa Yanes for the third place.

Thamara Silva was merciless. She first finished Portugal's Gracie Ferla and then caught Poland's Weronika Rot with an armbar to make it to the final. On the other side, Martina Gramenius beat Brazil's Ingridd Sousa by referee decision and then beat Bruna Maciel 2-0 in the semifinal. Martina was having a great performance in the final, as she was able to put the breaks on Thamara and keep the score at 2-2. That's when the Brazilian worked a triangle choke to end the match and conquer her fourth gold medal of the season. In the bronze medal bracket, Bruna Maciel beat Grace Ferla and Ingridd Sousa for the third place.

Gabrieli Pessanha made it to the final with a 3-1 win over Katiuscia Yasmir. On the other side, Yara Nascimento beat Claire-France Thevenon 3-1 and then finished Ane Svendsen. The final was another chapter of a rivalry that gets more and more fierce with every new encounter. Yara gave all she had trying to take the lead in the end but Gabi was able to sustain the 4-3 and add another gold medal to her hegemony in the weight class. In the bronze medal bracket, Barbara Bergbauer beat Ane Svendsen and Claire-France Thevenon for the third place.

Click here for the complete results. The Abu Dhabi Grand Slam Tour returns on June for the 2020/2021 season. The first stop is in Moscow, Russia. Stay tuned for more news and get ready for another year of thrills. Go to our Instagram accounts to relive the thrills at @ajptour and @jjwplus. More info at ajptour.com.