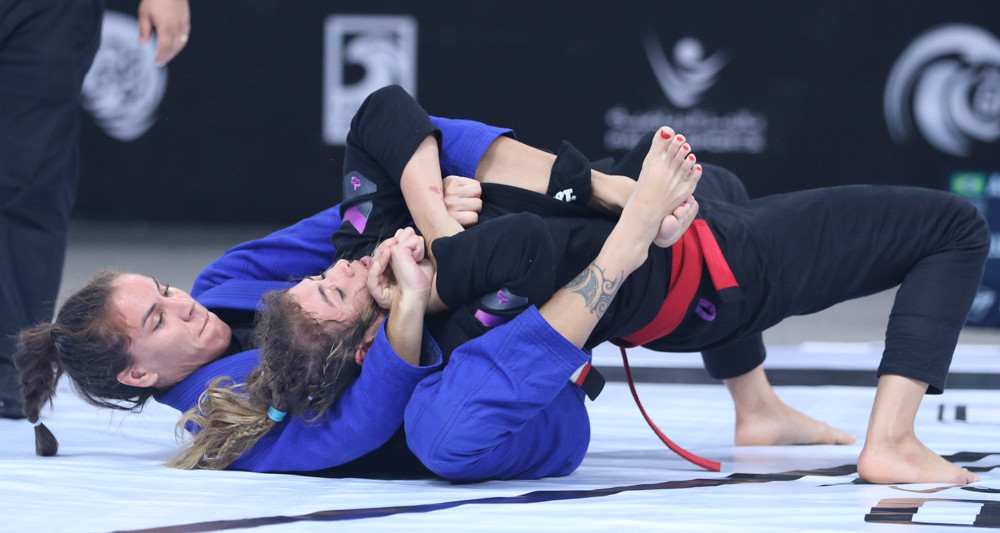 Abu Dhabi Queen of Mats: remember the action in the most groundbreaking event of the season

The 2019/2020 season was the moment women's Jiu-Jitsu reached new heights. On November 1st, 2019, the AJP launched the first ever edition of a groundbreaking series. The Abu Dhabi Queen of Mats landed in Rio de Janeiro, Brazil, with six of the most talented competitors in the lightweight division (under 62kg). Luiza Monteiro, Ana Rodrigues, Bianca Basílio, Amal Amjahid, Ana Talita Alencar and Mayssa Bastos took the mats by storm and awed the crowd with epic performances. The format of competition and the rules set proved perfect for even more thrilling matches. Let's remember that day of Jiu-Jitsu in Rio as we prepare for an even more thrilling new year of action on the mats during the 2020/2021 season. The ADQOM series is confirmed as part of the program.

Luiza Monteiro was on fire in Rio. She entered the mats four times and finished no less than three of her opponents. Her campaign kicked off on round 2 of group B, when she was able to catch Talita Alencar with a triangle choke. Later on, she met up with Amal Amjahid and secured the win with an armbar.

The semifinal put Luiza against fierce rival Bianca Basilio. Once again, Luiza kept the action level high and worked her way to Basilio's back to sink choke for the finish. The rival in the title match would be Ana Rodrigues, who got to the final after three matches where she beat Bia Basílio by referees decision, Mayssa Bastos 2-1 on advantages and finally Amal Amjahid 4-2 on points in the semifinals.

The title match was fast paced with Luiza using all her technique and experience to overcome Ana's energy. After managing a back take, Luiza worked hard for the best position to get the finish in a choke, but Ana was relentless in her defense. In the end, a 4-0 lead was enough for Luiza to secure the title of first ever lightweight Abu Dhabi Queen of Mats. “I am so happy! I wanted to put my game to work on every match and fight to finish all my opponents. I almost did it. It's an honor to compete against such tough adversaries from the new generation and prove that women's Jiu-Jitsu can be as exciting as men's,” said Luiza in the end.

Being considered a favorite means many times added pressure that some athletes have a lot of trouble dealing with. That's not the case with Brazil's Gabrieli Pessanha. After ruling the 95kg division in the recent past, Gabi arrived in Abu Dhabi on January 17 as the clear favorite for the title in the first ever heavyweight ADQOM. Gabi was joined by Nathiely de Jesus, Kendall Reusing, Thamara Silva, Martina Gramenius and Samantha Cook in a historic gathering of talent.

She fought four times to reach the top of the podium. In the group stage, Gabi first beat Thamara Silva 6-4 in a comeback run after being behind in the scoreboard 0-4. She made it to the semifinals with a 4-0 win over Martina Gramenius after a back take.

In the semifinal, Pessanha met up with well known rival Kendall Reusing, from the USA. Usually a tough and close match, this time Gabi was able to impose her game and build a 11-0 lead. On the other side of the bracket, Nathiely de Jesus made it to the final with three wins and three submissions. She caught Kendall with a kimura, choked Britain's Samantha Cook from the back and finally found a choke to beat Thamara Silva in the semifinals.

The title match was another thrilling installment of one of the most intense rivalries in Jiu-Jitsu today. Gabi Pessanha and Nathiely de Jesus are always protagonists of intense matches. In Abu Dhabi, the rivals were very careful not to make mistakes. A narrow 2-1 lead was the edge Gabi had to secure the title as the clock hit zero. She couldn't be more pleased with herself after the final win: “There were still a lot of people who doubted me. Said I was too young, only 19. Well, now I am the Queen. I want to thank God and all my family, friends and teammates for all the help,” said the newly crowned heavyweight monarch.