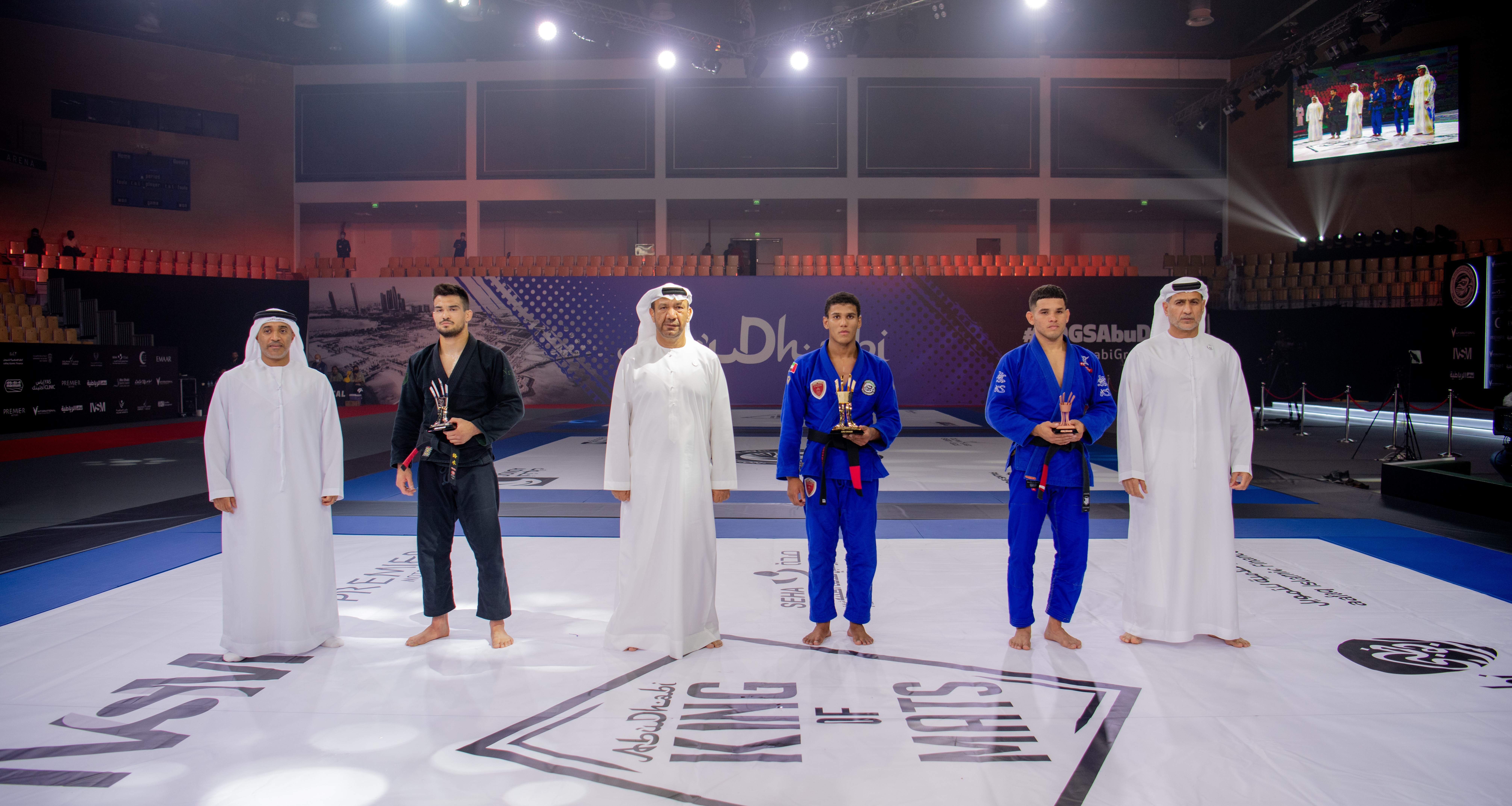 Day 2 of the Abu Dhabi Grand Slam Tour welcomed fans to the Jiu Jitsu Arena, in Abu Dhabi, this Saturday, May 7, 2022.  The public was treated to thrilling matches in the Masters division. Seasoned athletes 30 years of age or older gave their all in search of the 3000 points in the AJP Ranking. Closing the day, the Abu Dhabi King of Mats came back for its 11th edition, this time featuring the lightweight division. The competition featured six of the best competitors in the world. Meyran Alves had a stellar performance to secure the title.

Mr. Tareq Al Bahri, AJP's General Manager, stated:"The ‘King of Mats’ tournaments has gained much popularity and prestige in the world of Jiu Jitsu, especially with the growing demand for participation by the top players in the world. This is an unmissable opportunity for them to fight against the greatest in the world." Worldwide talent brings the action in the Masters Division

Each bracket of the event was stacked with big names. The Abu Dhabi Grand Slam Tour Abu Dhabi once again attracted the best competitors in the world over 30 years old. From the purple belt to the black belt, each match was a treat to Jiu Jitsu fans.

Antonio Santana, of the Roger Gracie Academy, in Brazil, added: "I am delighted to have earned gold in the Masters’ category. I'm happy that I was able to come here and compete in the Abu Dhabi Grand Slam. It's one of the most important tournaments because it brings together multiple world-class athletes. Winning this medal adds to my experience and motivates me to work harder and compete in future events."

Eloisa Crespo Perez, of Spain, who won gold, said: “I am very satisfied with the results and all my hard work has paid off. This is my second time competing in Abu Dhabi and my next goal is to participate in the World Pro."

Emirati Saud Nasser Al Harthy, of the A.F.N.T Academy, who earned silver in the Masters’ division, added: "I intended for the gold medal in today's contests and came close to it. I'll keep practicing in order to win gold in future competitions."

As expected, the black belt division was the highlight of the program. The men and women on the mats used every skill they had to achieve the ultimate goal of winning a gold medal. Here's how the Master 1 black belt finals played out. Click here for the complete results. In a close match, both competitors were cautious. Justin opened the score with a near guard pass. Luiz tied the match with a near sweep. Luiz won for scoring last.

Felipe scored the first point for coming on top on the double guard pull. Xavi played guard. Felipe got another point for a near guard pass. Felipe won by points.

Fight started with a double guard pull. Both athletes got one penalty. Thiago tried to attack the toe hold. Rafael tried to get to the back and got a point. Thiago got the finish with a toe hold.

Adriano went ahead 2-0. Osvaldo got a point for a penalty against Adriano. Osvaldo got two points for a takedown. Osvaldo won by points.

Renato pulled guard. Dante worked the pass. Dante got a point for a near guard pass. Renato swept and went for the back take. He got two points. Renato won for scoring last.

In four matches, Meyran Alves built his way to the title. In Group B, he debuted against Alexssandro Sodre. Playing on top, he built a 5-2 lead to win. In his second match, Alves faced Rodnei Junior and was able to make his game work to score a 8-0 lead.

The semifinal put Meyran face to face with Lucas Pinheiro. In a very tough match, Meyran went ahead in the scoreboard, but had no easy path to the final. In the final seconds, Lucas tried a foot lock, but was disqualified for turning Meyran's knee to the inside, which is prohibited.

In Group A, Isaac Doederlein worked hard to get to the final and compete for his second title in the ADKOM circuit. Champion in 2019, in Tokyo, the American debuted with an armbar finish on Omar Al Fadhli. The second match was against Lucas Pinheiro and Isaac worked a foot lock to win. In the semifinal, Isaac got through a very tough match against Alexssandro Sodre. A 4-3 lead put Doederlein in the final.

The title was decided in a thrilling match. Isaac went ahead on the scoreboard after a double guard pull. Meyran fought back and got two points with a sweep. At the end of the 5 minutes, Isaac worked a last second sweep, but could not complete it. ADKOM has another champion!

After all the effort, Meyran talked about his accomplishment: "I am very happy with the title. It’s so overwhelming. I prepared in a special way to participate in this tournament and watched several videos of my fellow participants and focused on their weaknesses and strengths. I would like to thank everyone who supported me throughout the training and also the organising committee for such a wonderful experience.”

Omar started playing guard. Lucas worked the pass. Lucas got a point for near passing. Omar tried to sweep in the end but couldn't. Lucas won by points.

Omar got two points with a sweep. Isaac worked an armbar to win via submission.

Isaac played on the bottom and worked a foot lock to finish Lucas.

Meyran got two points for coming up on the double guard pull. Meyran got 4 points for the mount. Meyran won by points.

Isaac got one point for coming up on the double guard pull. Alexssandro played guard. Both athletes got two penalties. Isaac won by points. Isaac got one point for coming up in the double guard pull. Meyran got two points for a sweep. Isaac tried a last second sweep but could not complete. Meyran won by points Sunday will be a fun day at the Jiu Jitsu Arena. The final tour of the 2021/2022 AJP season comes to an end with the highly regarded Professional Division. Literally, the best athletes in the world will take over the mats for over 8 hours of pure Jiu Jitsu. Fights kick off at 10AM, Abu Dhabi time. Click here for more info.