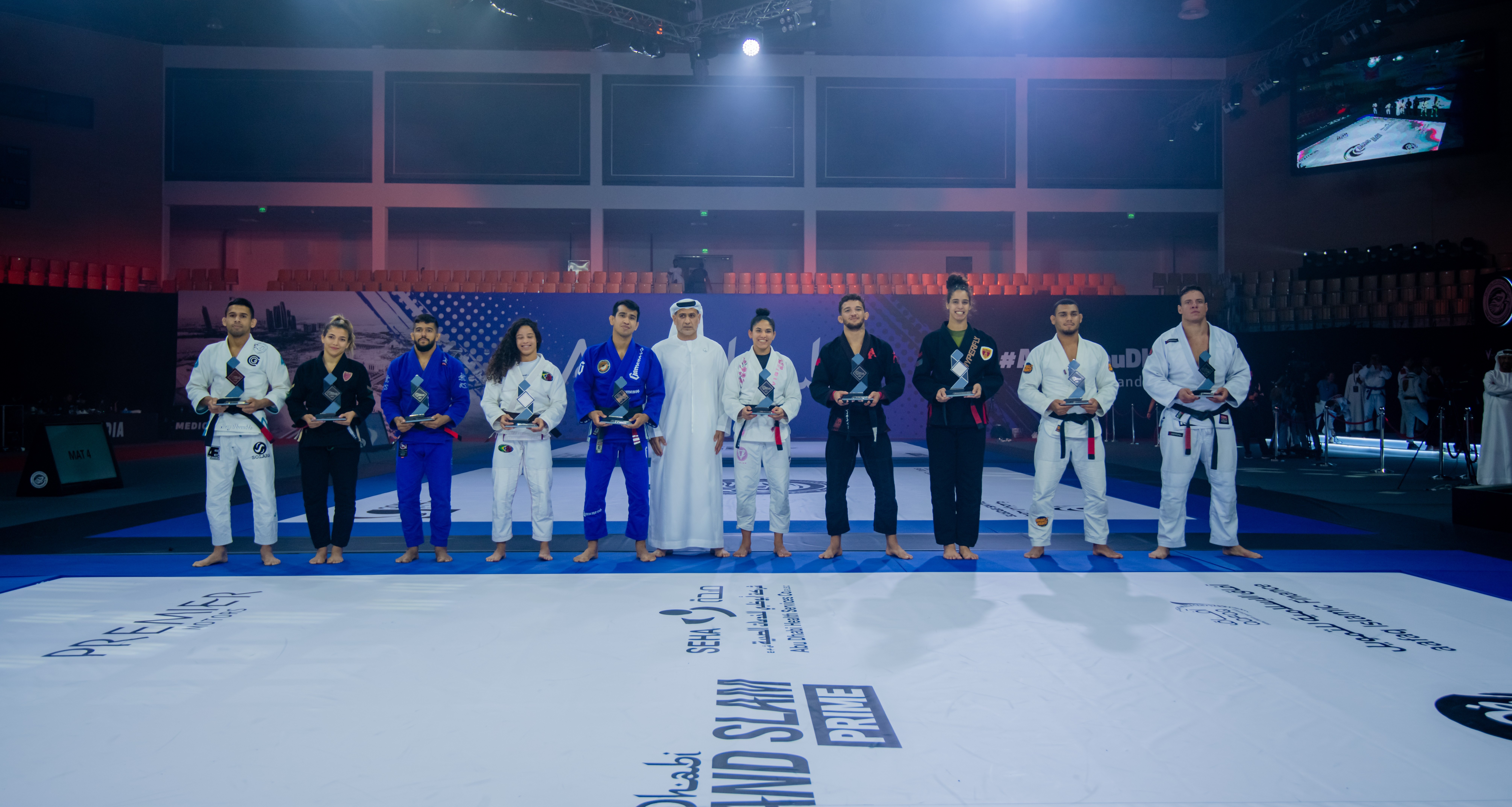 ADGS: Aces in the professional division deliver matches filled with thrills in the final day of the 2021/2022 ADGS Season

The best for last! Day 3 of the Abu Dhabi Grand Slam Tour welcomed the talented competitors of the Professional division. This Sunday, May 8, was the perfect ending for the 2021/2022 ADGS season. For more than 8 hours, the crowd both at home and on the stands witnessed the highest level of skills available in Jiu Jitsu today. In the end, deserving champions were crowned. Mr. Hasan Fardan Al Fardan, CEO of Al Fardan Exchange, celebrated the work being done with Jiu Jitsu: "The UAEJJF and AJP are doing an exceptional job that contributes to enhancing the country’s position on the global Jiu Jitsu map, which is in the line with our wise leadership's vision, marching us towards excellence on many levels. We're seeing some incredible performances from a group of UAE champions who are taking on the world's best players with excellent technical skills and zeal. It is a matter of pride and honor for us.”

AJP's General Manager, Mr. Tariq Al Baheri, commented on the closure of the 2021/2022 season: “The Abu Dhabi Grand Slam World Tours for this season ended successfully and we would like to congratulate the winners of the highest ADGS ranks for the 2021-2022 season, and we remind the players who were unable to participate in this round of more Abu Dhabi Grand Slam World Tours in the next season, which will be announced within days."

At the end of the matches, MMA legend Anderson Silva had a message for Jiu Jitsu practitioners: “All I can say is to train hard and have love for the sport. Thank you for inviting me to Abu Dhabi. The ADGS show is amazing with an amazing atmosphere.”

The Professional black belt division for men and the Professional brown/black belt for women deserved the most attention from spectators. Here's how the talent-filled brackets played out. Find the complete results here. Light Featherweight (-56kg) – With two men in the bracket, it was a best of three matches affair. Kazakhstan's Samat Aitpanbet first beat Brazil's Francisco Jonas Andrade 4-2. In the second match, Francisco came back to win 2-1. In the third and final match, Francisco played on top since the beginning, but won the match with a triangle finish from the guard.

Featherweight (-62kg) – Finalists Hiago George and Lucas Pinheiro, from Brazil, had tough runs to the gold medal match. Hiago beat Rodnei Junior 2-0 in the semifinal. Pinheiro beat Yuri Hendrix 7-0 and then outscored Andrew Santos 2-0 to reach the final. In the title decider, Hiago found a triangle choke early in the match. Pinheiro was very brave to escape. Even without the finish, Hiago managed a 5-1 lead to secure the title.

Lightweight (-69kg) – Two matches for each finalist on their way to the title decider. Thiago Macedo beat UAE's Omar Al Fadhli 7-1 and then outscored Georgia's Dzhimsher Razmadze 4-2. On the other side, Marlus de Souza beat ADKOM runner up Isaac Doederlein 6-3 and then outscored Alexssandro Sodré 4-2 to reach the final. In the gold medal match, Thiago managed a sweep and scored 2-0 early in the match. He was able to keep the lead until the end and take the title.

Welterweight (-77kg) – In a stacked bracket, each finalist fought twice to reach the gold medal match. André Luiz Cantanhede beat Lucas Protásio 3-1 and Alessandro Botelho 2-0. On the other side, Ademir Araujo beat Adriano Araujo for scoring last in a 6-6 tie and then outscored Jonatham Silva 9-0 in the semifinal. The title decider was a close one. Ademir started out with a sweep. He managed to keep the top position and win with a 3-2 lead.

Middleweight (-85kg) – There was no shortage of talents in the bracket. Gabriel Costa beat South Korea's Seonghun Yoo 1-0 and then got the win over Brazil's Charles Negromonte for scoring last in a 2-2 tie. On the other side, Uanderson Ferreira beat Igor Sousa 2-1and then outscored Portugal's Pedro Cadete 5-4 to reach the gold medal match. In the final, Uanderson got a takedown, but ended with Gabriel on his back. Costa worked his way to a lapel choke for the title.

Light Heavyweight (-94kg) – With three men in the bracket, it was a fast and thrilling affair. First Catriel Rodrigues caught Ithalo Araujo with a foot lock. Then Ithalo Araujo outscored Renato Cardoso 3-2. In the third match, Catriel came out strong and built a 8-0 lead,. Renato fought back and shortened the lead to 8-3. The final score was 10-3 to Catriel, who secured the title.

Super Heavyweight (-120kg) – The big guys showed up. In a stacked bracket, each finalist had a tough path for the chance to compete for gold. Wallace Costa finished Colombia's Wilson Canga and then beat Rodrigo Ribeiro 5-3. On the other side of the bracket, Russia's Anton Seleznev had three matches before the final. He beat Brazil's Daniel Ribeiro 1-0, beat Igor Silva via WO and finally outscored Guilherme Guedes 4-1. In the gold medal match, Anton managed a sweep with the final two minutes. The Russian managed to keep the 2-0 lead to win the gold medal.

Roosterweight (-49kg) – Two matches for each finalist. Brazil's Vanderlucia Lima beat UAE's Shouq Aldhanhani 8-3 and then outscored Swiss Sabrina Migliozzi 2-1. On the other side, Emirati Sharifa Alnaamani beat Thailand's Kacie Tan for scoring last in a 3-3 tie and then finished UAE's Wadima Alyafei in the semifinal. In the gold medal match,Vanderlucia had total control of the match to reach Sharifa's back and finish with a choke.

Light Featherweight (-55kg) – In a stacked bracket, Brazil's Ana Rodrigues confirmed her favorite condition and made it to the final in two matches. She finished Colombia's Isabel Alfaro and then outscored Holland's Rose El Sharouni 3-2. On the other side of the bracket, Brazil's Gabriela Pereira beat Swiss Laurie de Oliveira 2-1 and then outscored American Alexa Yanes 2-0. In the gold medal match, Ana stayed on top and worked the guard pass. Gabriela managed a sweep and was able to maintain the top position to the end and win 2-1.

Lightweight (-62kg) – Brazil's Julia Alves made it to the final in two matches. She finished Jordan's Yara Kkakish and then outscored Bulgaria's Violeta Angelova 5-0. On the other side of the bracket, Brigida Felipe beat Luciane Silva 2-0 and then finished Larissa Paes with a choke to reach the final. The title decider started with Julia on the bottom and Brigida working the pass. In the very end, Julia attacked a foot lock, but could not get an advantage. In extra time, again no points were scored. Julia won via referee decision.

Middleweight (-70kg) – Brazil's Rebeca Lima had a two-match run to the final. She beat Rafaela Bertolot for scoring last in a 2-2 tie. Then she repeated the score and result against Ingridd Sousa. On the other side of the bracket, Thalyta Silva beat Marian Urbaday 4-0 and then outscored Larissa Santos 2-0. In the final, Thalyta managed a sweep with two minutes to go ahead in the scoreboard. Heavy on top, Thalyta secured the title with the 2-0 score.

Heavyweight (-95kg) – Heavyweight ADQOM champion Yara Nascimento came back to the arena to beat Marcele Cantanhede 10-0 and reach the final. On the other side, Italy's Silvia Scomparin beat Brazil's Amanda Ribeiro for scoring last in a 3-3 tie. In the final, Yara went for it since the beginning and got a bow and arrow choke for the title with less than a minute in the clock.

Brazil dominated the top of the podium in the Professional Brown Belt division. Even so, the UAE and Belgium managed to secure one gold medal each. Check out the champions.

The list of champions proves how successful is the work that is being done in the UAE. The country had four gold medalists in the purple belt. Brazil, Russia and Jordan also had good showings.

The season-long effort of our heroes was rewarded after the matches ended in the Jiu Jitsu Arena. The AJP congratulate all ranking winners and hope to see all athletes on the mats in the coming season. The AJP does not take a break, we are already planning a bigger and better next season, with more events and even more quality for athletes and Jiu Jitsu fans. Stay tuned on our Social Media channels for more news coming soon. More info at  ajptour.com.

Once again, the world of Jiu Jitsu will gather in Abu Dhabi. The next edition of the ADWPJJC is scheduled November 11-19, 2022. For nine days, the best of the best will be in the Jiu Jitsu capital of the world for a groundbreaking event. Registrations are open. More info at ajptour.com.