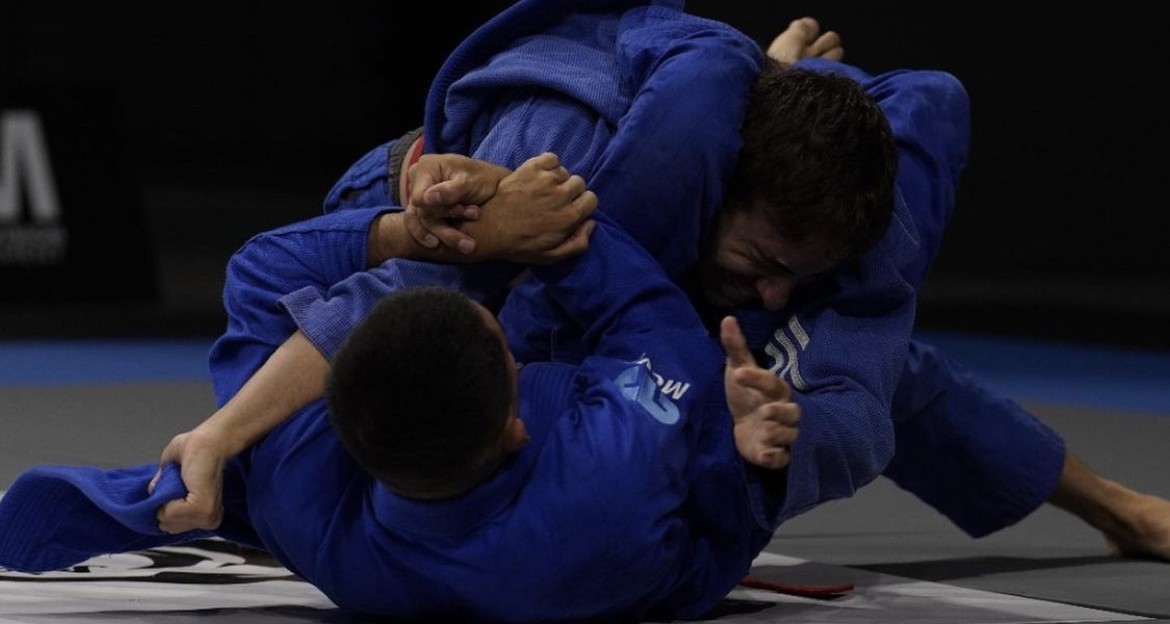 ADGS Miami: Zayed Alkatheeri, Israel Almeida and Gabi Pessanha stand out among champions in the final day of Jiu Jitsu in Florida

The second event in the 2022/2023 Abu Dhabi Grand Slam season wrapped up this Sunday, August 28, 2022, in Miami, Florida. The elite of the Professional Division made their way to the Watsco Center, in Coral Gables.

Since 11:00AM, local time, the crowd on the stands and all of those watching at home were treated to the highest level of Jiu Jitsu. Athletes in the purple belt, brown belt and especially the black belt gave their best on the mats in search of the gold medals and the 2000 points in the AJP ranking.

The ADGS Miami welcomed some of the most accomplished competitors in Jiu Jitsu today. As usual, the AJP was honored to provide all athletes with a safe, healthy and fair environment that allowed them to reach maximum potential.

Day 2 of the ADGS Miami had once again the VIP presence of His Excellency Omar Mohamed Karmastaji, Vice President of ADNOC Group General Services. Mr Omar presented medalists with their well deserved medals.

Light-featherweight (-56kg) – The UAE's Zayed Alkatheeri made it to the final with a 7-4 win over American Justin Ordinário. On the other side, Mexico's Frank Cespedes beat Italo Frota by submission. In the final, Alkatheeri went ahead 1-0 early on. Frank tried an armbar and turned the score 3-1. Zayed did not give up and tied 5-5 in the end to take the gold medal for scoring last in the match. Featherweight (-62kg) – Two matches for each finalist. Carlos Silva beat Faris Kashmeeri, from Saudi Arabia, by submission and the UAE's Omar Alfadhli 4-2 to reach the final. On the other side, Hiago George finished American Michael Alvarez and beat Japan's Shoya Ishiguro 2-0. In the final, both fighters were cautious and no point was scored in the five minutes of regulation time. After the golden score minute, Hiago took the gold medal by referee decision.

Lightweight (-69kg) – Meyran Alves made it to the final in two matches. He finished Danilo Moreira and beat Alex Sodre 7-0. Israel Almeida finished Thiago Almeida and beat Pablo Lavaselli 2-0 on his way to the final. In the gold medal match, Meyran opened with intensity, but Israel was able to hold the young gun back. At the halfway mark, the score was still 0-0. Meyram tried to make the pass happen within the final minute while Israel worked his sweeps. The five minutes of regulation time ran out with no scoring. In the golden score minute, Meyran sped up on top, but was still unable to secure a point. After six minutes, Israel Almeida took the gold medal by referee decision.

Welterweight (77kg) – Lucas Lima took the long route to the final. He beat Cesar Miyahira 3-0, outscored Vinícius Barbosa 4-2 and beat Sebastian Guevara, from Ecuador, 7-4. On the other side, Johnatha Alves finished Vinicius Reis and beat Levi Jones-Leary 2-0 to meet Lima in the final. Johnatha started the gold medal match on the bottom, while Lucas worked the guard pass. Close to the two-minute mark, Johnatha got the sweep for the 2-0 lead. Now on top, Johnatha worked the guard pass and added two more points with advantages. As the time ran out, Lucas was not able to reverse the 4-0 lead and Johnatha celebrated the title.

Middleweight (-85kg) – Ronaldo Junior fought twice on his way to the final. He beat Enderson Almeida 1-0 and then repeated the score against Carlos Neto in the semifinals. Manoel Filho finished Uruguay's Fausto Godoy and then beat Marcos Tinoco 4-0 in the semifinals. In the gold medal match, Ronaldo Junior pulled guard after some aggressive judo. Ronaldo needed half of the match to sweep Manoel Filho and go 2-0 ahead. On top, Ronaldo extended the lead to 5-0 with advantages. Manoel scored his first two points with a sweep at the final minute mark. Even so, Ronaldo kept the match in control and won with a 8-3 lead after escaping a dangerous foot lock in the final seconds.

Light-heavyweight (-94kg) – No easy path to the final for Davi Cabral. He beat Victor Lima via submission and also tapped Eduardo Inojosa. In the semifinal, another finish, this time over Lucas Lisboa. Fellipe Silva did almost as good. He finished Christopher Passerrello, beat Gabriel Almeida 2-0 and tapped Matheus Godoy. In the final, Fellipe Silva went ahead 2-0 early with a sweep and kept Davi Cabral uncomfortable. At the halfway mark, Fellipe had a 3-0 lead and stayed in top position. Near the final minute mark, Davi managed a sweep to score two points, but it was not enough, as time ran out with a 3-2 lead for Fellipe.

Super-heavyweight (-120kg) – Wallace Costa fought once to reach the final. He beat Vinicius Gazola 1-0. His opponent in the gold medal match would be Roosevelt Sousa, who finished Ricardo Evangelista and also Herico Pinto. In the final, Roosevelt started playing guard as Wallace tried to find a way to pass. At the halfway mark, no points were scored yet and that remained until the end. In the golden score minute, Roosevelt managed a near takedown to score the deciding point and win 1-0.

Roosterweight (-49kg) – Brenda Larissa made it to the final with a 2-0 win over Rawanna Da Silva. Her opponent would be Thamires Aquino, who beat Maria Ono 5-4 in the other semifinal. In the gold medal match, Brenda went on a blitz early on to nearly pass the guard and take the back that meant a 3-0 lead. Thamires fought hard to come back, but Brenda was able to hold on to a 3-2 lead and win the gold medal. Light-featherweight (-55kg) – Ana Rodrigues beat Holland's Rose El Sharouni via submission and made it to the final. Her opponent would be Amanda Canuto, who finished Argentina's Eliana Carauni and beat Gabriela Pereira 2-0. In the gold medal match, Ana went in full force and scored three points within the first minute. With half the time left, Ana had a 5-0 lead and was in control of the match against Amanda. Ana eventually made her way to full mount, but Amanda was brave and didn't allow the finish. The final score was 10-0 for Ana, her second in the 2022/2023 season.

Lightweight (-62kg) – Julia Alves beat Fernanda Figueira 2-0 and then Luiara Rochael 3-1 to reach the final. Suellen de Souza finished Maria Silva and Larissa Santos to secure a spot in the final. In the gold medal match, Julia Alves started on top, but Suellen managed a sweep to go ahead 2-0. On the bottom, Julia Alves managed a knee bar to secure the title.

Middleweight (-70kg) – Izadora Silva debuted with a submission on Rebecca Lima and then beat Thamara Silva for scoring last in a 2-2 tie. American Elizabeth Clay beat Ingridd Sousa for scoring last in a 1-1 tie and then finished Amanda Hening. In the final, Izadora came in hot and managed a guard pass to build a 4-0 lead. Elizabeth would not give up and managed a sweep to make the score 4-2. Still losing, the American worked the guard pass, but could not complete it. Before the five minutes ran out, Izadora scored another point to win 5-2 and become the champion.

Heavyweight (-95kg) – Gabrieli Pessanha fought once to reach the final. She finished Italy's Silvia Scomparin. Gabi's opponent would be Giovanna Jara, who beat Larissa Almeida 2-0. In the final, Gabrieli started playing guard while Giovanna tried to pass. After some scramble, Giovanna worked her way to Gabi's back to score a 4-0 lead. Later on, with a sweep, Giovanna extended the lead to 6-0. and after that to 9-2. Giovanna stayed in control until the final two minutes, when Pessanha worked a guard pass and mount and turned the score to 11-9. The final minute saw Gabrieli keep top position to win. Next stop of the Abu Dhabi Grand Slam is in Sydney, Australia

For the complete results of the ADGS Miami, click here. After two widely successful legs, the Abu Dhabi Grand Slam now heads down south. Sydney, Australia, is the next stop. The event is scheduled February 4-5, 2023, at the Quaycentre at the Sydney Olympic Park. Click here for more info. Follow the latest news on the AJP at our Social Media channels. Rewatch every match at ajptour.tv.