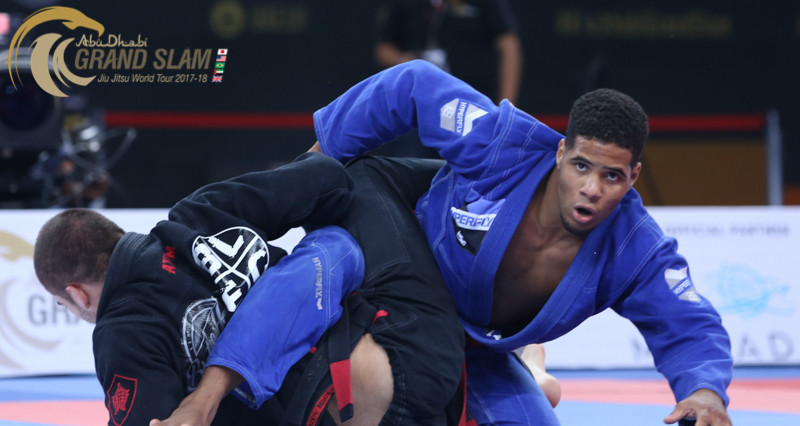 The final day at the Abu Dhabi Grand Slam Jiu-Jitsu World Tour Rio more than delivered all the thrills expected by the crowds that packed the stands of the Arena Carioca 1, at the Olympic Park, in Rio. The female brown/black belt division, the Legends Super Match and the male black belt division crowned its champions in matches that caught the attention of the entire venue.

Another highlight of the day was the presence of the Para-athletes, which at one point took over all nine mats of play. They inspired all of those present with their dedication to the gentle art despite the obstacles life put in front of them. Here's a brief write up on the events of the day.

55kg – In a close match, black belt Amanda Nogueira had trouble to deal with a very game opponent in brown belt Mayara Abraão. The 2-0 lead that meant Amanda the title was built with a takedown halfway into the match.

62kg - Bia Mesquita continues to impress the crowd with solid performances. In the final against the very dangerous Bianca Basílio, Mesquita put her game to work and was able to build a solid 6-0 lead to prove once again she is the undisputed queen of the weight class.

70kg – Ana Carolina Vieira seems unstoppable. After two opponents finished on Saturday, she completed the job in the final with a choke from the back on Thamara Silva and the second straight title at the Grand Slam.

90kg – In another match between a black belt and a brown belt, Claudia Do Val had trouble to score against a very tough Heloisa Ferreira. Playing on the bottom most of the time, Claudia threatened Heloisa with triangles and omoplatas. The work on Do Val's part was enough for the referees to point her the champion after a 0-0 tie on points.

56kg – José Carlos Lima secured the gold medal with a safe performance against American David Herrera. In a very close match, he managed a 2-1 lead on advantages to take the title home.

62kg – João Miyao and Hiago George gave the crowd what they wanted. The two teammates went for it in the final and engaged in a fierce sweep game back and forth. In the end, with the score in a 6-6 tie on points, a 1-0 lead on advantages made Hiago the champion.

69kg – João Neto wasted no time. Early on in the final match, he caught Rafael Mansur in a powerful triangle choke. Mansur used all his technique and strength to resist the tap for a few minutes, but in the end had no choice but to tap, awarding Neto the title.

77kg – In another very close match, Hugo Marques took one of the few opportunities to score a 2-0 lead with a sweep and go ahead on the scoreboard. He kept the lead until the end to claim the gold medal.

85kg – Isaque Bahiense is now two for three in the 2017/2018 season of the Grand Slam. The second gold medal came with a 3-0 win on advantages over the tough Gustavo Batista. The final was a very strategic match between two opponents that displayed a lot of respect to each other's games.

94kg – After beating Xande Ribeiro in the semifinals, Patrick Gaudio arrived at the final against Guilherme Santos as the favorite. Nevertheless, the match was not one-sided, as Santos proved to be a very game opponent. The match was almost entirely fought with both fighters standing and in the end Gaudio won by referee decision after a 0-0 tie on points.

110kg – Under the coaching of no other than Leandro Lo, Gerard Labinski went for it in the final match against Igor Silva. The Poland expat who lives in São Paulo and trains at NS Brotherhood, played on top and managed to reach Silva's half guard and score a 1-0 lead on advantages.

GF Team gave another display of its strength in Brazil, specially in Rio. The team collected 35 gold medals, 32 silver medals and 27 bronze medals, adding up to 25408 points, more than 16,000 more points than the second place finisher. Gracie Barra came second with 9252pts and Nova União completed the podium with 7868pts. Click here for the full results.

Rafael Carino and Carlão Barreto were welcomed with warmth by the crowd in Rio. Once on the mat, the two legends delivered the show it was expected of them. In a close match, Carino was able to score first with a takedown that put him 2-0 in the lead. Carlão fought back fiercely, but he was unable to tie the match. Once it was over, the two warriors opened big smiles and hugged it out to celebrate the art they both love and defend.

Click here for a full photo gallery of the black belt finals.

The Abu Dhabi Grand Slam Jiu-Jitsu World Tour returns January 12-13, 2018, for the fourth leg of the 2017/2018 season in Abu Dhabi, capital of the UAE. The early registration period ends December 11 (late registration ends January 8). The event is open to all nationalities and will offer over $195,000 in prizes. Click here to register now.

It may have been a cold and rainy Saturday in Rio, but day two of the Abu Dhabi Grand Slam Jiu-Jitsu World Tour was nothing but hot stuff. The nine mats set up at the Arena Carioca 1 lit up since the first match of the female brown/black belt division and the highlight of the day, the male black belt division.

Some of the biggest names in the sport treated the crowd to the highest level of Jiu-Jitsu. In the end, all the finals were set for the grand finale this Sunday, when the champions will be crowned. Here is how each weight class played out in the adult black belt division.

49kg - Mayssa Caldas took the gold medal home without having to step on the mats. Her only two opponents, Tamiris Vieira and Thamires Aquino, did not show up for the weigh-in.

62kg - In a round robin bracket, first Bia Basílio caught Juliana Maira with a foot lock and then Bia Mesquita choked Maira from the back. Basílio and Mesquita will square off this Sunday for the title.

70kg – In the most crowded female division, Ana Carolina Vieira fought twice to make it to the final and be able to defend her throne. She first caught Renata Moreira with a choke from the back and then finished Glaucia Braga with a katagatame. Carol's opponent will be Thamara Silva, who beat Andressa Cintra 4-2 and Erin Herle 2-0 on advantages.

90kg – Claudia Do Val finished second in the division at the Grand Slam Los Angeles. In Rio she wants to go all the way, so she kept no hostages in two matches on her way to the final. She first beat Samella Shohamy by decision and then finished Brenda Heller with an armbar. Claudia will meet Heloisa Ferreira, who finished Milena Carneiro and outscored Barbara Barbosa 24-0.

56kg – José Carlos Lima fought twice to make it to the final. He first beat Levy Ferreira by referee decision and then outscored Robson Soares 8-2 in the semifinal. David Herrera needed to fight only once to reach the gold medal match. He beat Juan Silva by DQ in the quarterfinals and had no opponent in the semifinal.

62kg – Teammates João Miyao and Hiago George fought three times each to reach the final. Miyao first outscored Francisco Andrelino 13-0, then scored 2-0 on Danilo Moreira and finally finished José Tiago from the back in the semifinal. On the other side, George outscored Alan Oliveira 2-0 and then finished Felipe Mello and Pedro Clementino with armbars.

69kg – Rafael Mansur fought twice on his way to the final. He first beat Victor Moraes by referee and then beat Luiz Vieira 2-1 on advantages in the semifinal. His opponent in the gold medal match will be João Gonçalves, who in three matches beat Raphael Cadena 2-0, finished Julio Rufino and choked Pedro Neto from the back in the semifnals.

77kg – One of the most crowded male black belt weight classes forced Ricardo Lima to fight four times on his way to the final. He finished Lauro Segundo, beat Talles Silva 3-0 on advantages and Iago Lopes 1-0 on advantages as well. In the semifinal, Lima beat Samuel Dias by referee decision. On the other side, Hugo Marques beat Jan Wanser 7-0, Richard Filho by DQ, outscored Caio Cipriano 2-0 on advantages and finally defeated Jaime Canuto by referees decision.

85kg – Isaque Bahiense wants to repeat the title he won at the Grand Slam Tokyo. In Rio, he fought four times to reach the final. Isaque first beat Matheus Souza 2-0, then Thiago Sá 4-3 on advantages in a close match, and finally finished Rodrigo Miguel. The last challenge was against William Martins, caught with an armbar. On the other side, Gustavo Batista also had a great performance. In four matches, he finished João Santos, Vinicius Fernandes and Danilo Ponte. In the semifinal, another finish, this time an armbar on Luiz Neves.

94kg – In a star-studded division, Guilherme Santos made his name known on his way to the final. His first match was against Adam Wardzinski, in the quarterfinals, when a 6-0 lead on advantages was the edge. In the semifinal, he choked Dimitrius Souza from the back. On the other side, Patrick Gaudio had to walk through fire to reach the gold medal match. He first outscored Rafael Silva 7-0 and then met with no other than Xande Ribeiro in the semifinals. After a very close match and a 2-2 tie on advantages, the referees decided for Souza.

110kg – Fighting to retain the crown he won at the Grand Slam LA, Igor Silva fought twice this Saturday to reach the final. He beat Gustavo Dias 1-0 on advantages and then finished Guilherme Cordiviola with a triangle. Poland's Gerard Labinski feared not the Brazilian crowd and in two matches made it to the final. He outscored Diego Braz 4-0 and then had a powerful performance against Americo Netto to win 13-0.

After several days of cold weather and clouded skies, Rio de Janeiro woke up this Friday, November 10, to a typical summer day. The temperature went up to 35 degrees celsius and the sun shined bright in the sky to make the Cariocas happy. With the perfect weather, the Arena Carioca 1, one of the brand new venues built for the 2016 Olympics, welcomed a good-sized crowd for the first day of the third leg of the 2017/2018 season of the Abu Dhabi Grand Slam World Tour. Day 1 was dedicated to hundreds of purple belts and white belts in the adult and master divisions.

The nine mats set up in Rio were the stage for fierce battles throughout the day since the opening ceremony that featured the national anthems of Brazil and the United Arab Emirates. In more than seven hours of great Jiu-Jitsu, lots of drama unfolded until all the champions were crowned. One division deserves a special mention. The master 1 purple belt 77kg division saw the para-athlete Thiago Silva have a portentous performance to win the gold medal in three matches. Competing against non-disabled opponents, Thiago made a powerful statement on the capacity of adaptation Jiu-Jitsu provides to athletes.

Here are the champions in the adult male and female purple belt division.