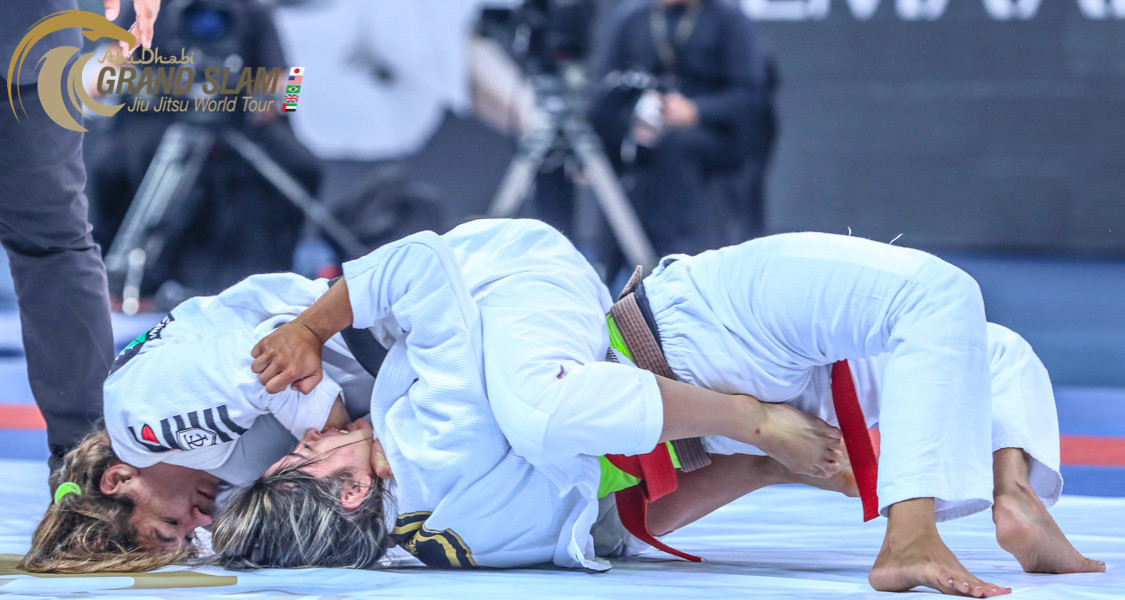 Abu Dhabi Grand Slam Rio: champions finish their way to the top of the podium in exciting day of finals in Rio

The black belt competitors were on fire this Sunday on day 3 of the Abu Dhabi Grand Slam Rio, at the Arena Carioca 1. Seven out of eleven black belt finals in the adult division ended with a submission. The crowd was pleased to witness such high level of Jiu-Jitsu on the mats.

Here's how each weight class crowned its champion in Rio.

56kg – Carlos Alberto Silva controlled the action throughout the entire match against Felippe Melo. He eventually worked his way to the back to get the tap with a choke and celebrate his first ever ADGS title.

62kg – What a rematch! After waging war at the ADGS LA, two months ago, Hiago George and Gabriel Sousa met again in another final. This time, Hiago left nothing to chance and managed a foot lock to reclaim his place on the top of the podium.

69kg – Isaque Paiva is actually old enough to compete in the masters division. Even so, he registered as an adult and ended up champion. In the final, he finished João Mendes with an armbar from inside the triangle.

77kg – Hugo Marques finished a brilliant campaign with a very tough match against Yan Paiva. After a 0-0 tie, a split referee decision made Marques the champion.

85kg – Another 2018 ADWPJJC champion in the scene, Isaque Bahiense was unstoppable this weekend. In the final, he imposed his game on Diego Ramalho to build a 11-0 lead and take the gold medal home.

94kg - Kaynan Duarte faced his Atos teammate Helton Jose Jr in the final. A sweep was enough for the 2-0 lead that granted Duarte the gold medal.

110kg – Erberth Santos is another back to back champion. After winning in LA, he came to his home country to defend his title. In the final, he made his way to Fernando Reis' back to sink a bow and arrow choke and retain the title.

49kg – Mayssa Bastos is now three for three in the ADGS season. She faced a very tough opponent in Rita Reis and worked hard to reach the mount and finish the match with a cross choke.

55kg – Talita Alencar is back. The 2017 ADWPJJC champion returned to the circuit and went all the way to beat Amanda Monteiro via split referee decision following a 0-0 tie in the final.

62kg – The champion is back! Bia Basilio came back to the season after winning the division at the 2018 ADWPJJC. In the final, she beat Michele Oliveira by unanimous referee decision following a 1-1 tie on advantages.

70kg – Back to back titles to Thamara Ferreira. After winning in LA, she came to Rio and successfully defended her crown. An armbar on Julia Boscher put the final touch on a flawless campaign.

90kg – Three strikes for Gabi Pessanha. The brown belt won her third gold medal in the 2018/2019 ADGS season with a Ezekiel choke from the back on Chile's Francisca Floras. The finish was the perfect grand finale for a great performance.

Rafael Carino kept his title in the Abu Dhabi Legends series. In a tough match against Alexandre Barauna, Carino managed to get the win via referees decision following a 0-0 tie. After the win, Rafael asked for a chance to challenge Marcio Pé de Pano for the heavyweight belt.

For the complete results of the Abu Dhabi Grand Slam Rio, click here. Find the complete coverage on Instagram, @ADWJJT.

The 2018/2019 season of the Abu Dhabi Grand Slam Jiu-Jitsu World Tour now travels to the UAE. The tour lands in Abu Dhabi on January 10-12. The registration for the next stop of the season is already open. Click here for more info and to register now.