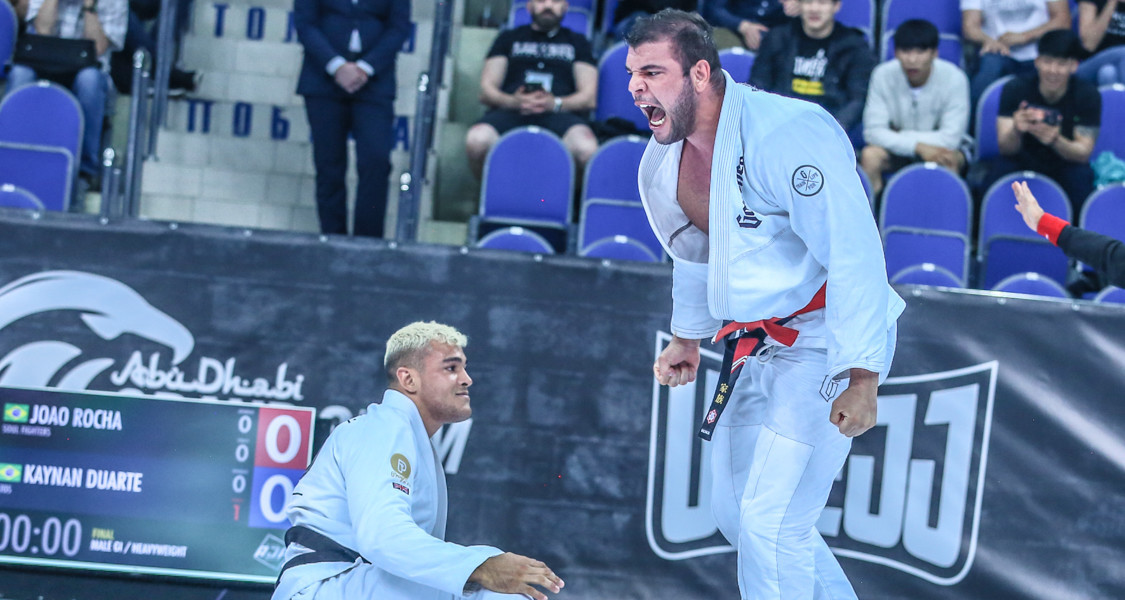 Abu Dhabi King of Mats: João Gabriel Rocha wages war to secure the right to fight for the heavyweight belt

Day 1 of the 2019/2020 season opener for the Abu Dhabi Grand Slam Tour could not have been more thrilling. The crowd on the stands of the Triumph Arena in Moscow and the people watching at home were treated to the highest level of competition. The highlight of this June 15 on the mats was the heavyweight bracket of the Abu Dhabi King of Mats. Ten of the best competitors in the world clashed to determine who would secure the right to compete against Erberth Santos for the belt in the near future. Featuring huge names, the heavyweight bracket captured the attention of the crowd. Here's how it all played out.

On group A, Jackson Sousa debuted with a 4-2 win over Gerard Labisnki after managing a last second sweep. Also on group A, Igor Silva won his first match via WO when Kaynan Duarte had problems arriving in time at the venue to compete. On Group B, Jonnatas Gracie made his first ever official black belt match a display of why he is so highly regarded. A choke from the half guard on Donghwa Choi put an end to the match. Group B closed round 1 with a 2-0 lead win by Rudson Mateus over Adam Wardzinski.

João Gabriel Rocha debuted on group A with a comfortable 5-0 lead on Gerard Labinski. Jackson Sousa was back on the mat to score his second win on Group A with a 4-2 lead over Igor Silva. On Group B, two sweeps were enough for Jonnatas Gracie to outscore Ricardo Evangelista 4-2. Closing the round on Group B, Adam Wardzinski imposed his game to finish Donghwa Choi with an Ezekiel choke.

After being late for his first match, Kaynan Duarte showed up for his second match on group A. Behind 2-6 on the scoreboard, Kaynan found a guillotine choke to finish João Gabriel Rocha. Also on group A, Gerard Labisnki beat Igor Silva 2-0 with a sweep. On Group B, Ricardo Evangelista found a toehold to finish Rudson Mateus while Jonnatas Gracie found a sweep to build a 2-0 lead over Adam Wardzinski.

Kaynan returned to kick off group A with a narrow 1-0 lead on advantages over Jackson Sousa to win his second match in the bracket. Group A closed the round with a 1-0 lead on advantages for João Gabriel Rocha over Igor Silva. On Group B, Rudson Mateus finished Donghwa Choi with an armbar while Adam Wardzinski was able to reverse a 6-2 lead and beat Ricardo Evangelista 9-6 with a last second guard pass and mount to score 7 points at once.

In a very close match, Kaynan Duarte waited until the final minute to be able to sweep Rudson Mateus and make his way to the final with a 4-2 lead on points. The second spot in the final was decided in a thrilling match. João Gabriel Rocha survived an armbar attack by Jonnatas Gracie to pass the guard in the very end and build a winning 3-0 lead.

Rudson Mateus once again made good use of his guard game to find an armbar and finish Jonnatas Gracie and secure his spot in the podium.

The title was decided in a total nail-biter. João Gabriel Rocha and Kaynan Duarte played safe and did not take any unnecessary risks. The final minute was the window for the winning move from Rocha, who found a near takedown to score the advantage that put him ahead 1-0 on the scoreboard and gave him the win. With the result, João Gabriel Rocha qualified to face Erberth Santos in a super match that will decide who's the new heavyweight King of Mats.