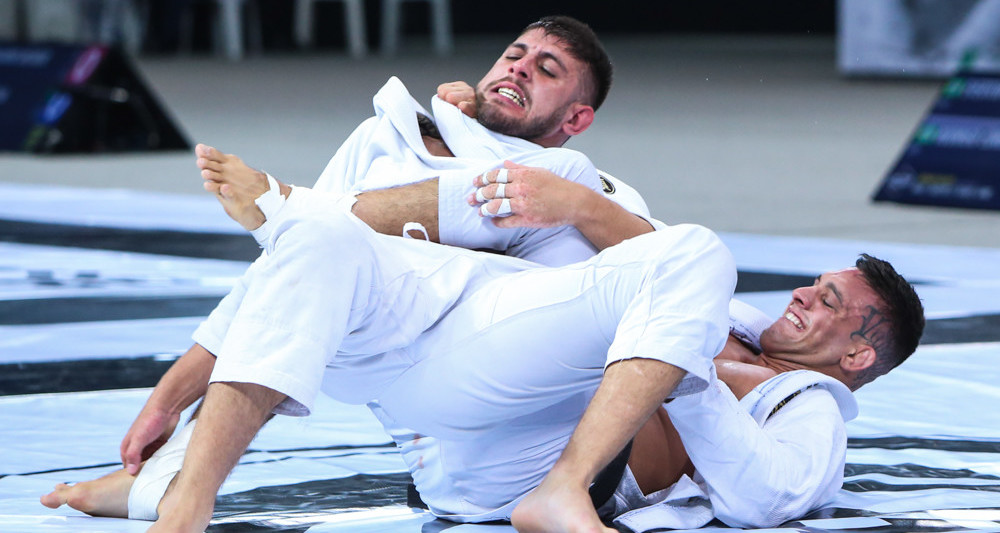 Brazil lives and breathes Jiu-Jitsu. The fifth edition of the Abu Dhabi Grand Slam Rio de Janeiro, this weekend of November 1-3, at the Arena Carioca 1, in Rio, was yet another opportunity for Brazilians to show their love for the sport.

56kg – Carlos Alberto Oliveira is now a back to back ADGS Rio champion. In two matches, Bebeto first caught Fred Guimarães with a toe hold to qualify for the final and face teammate Jorge Nakamura. The gold medal came with a guillotine finish.

62kg – Diego Pato went down one weight class from his gold medal campaigns in Moscow and Los Angeles to win his third title in the 2019/2020 season. He caught Carmones Alencar with an armbar, beat Gabriel Sousa by referees decision and then finished Hiago George in the semifinals. The gold medal match was a nail-biter against Cleber Fernandes. Pato took the gold medal home with a 5-2 lead on advantages after a 4-4 tie on points.

69kg – In a crowded bracket, Alexssandro Sodré fought five times on his way to the gold medal. He beat Marcos Santos 12-0, Bernardo Dib 2-0, Pedro Neto 8-6 and Marlus Souza 8-6 in the semifinal. In the gold medal match, Sodré outscored Gabriel Figueiró 6-2 to secure the title.

77kg - In another jam-packed bracket, champion Natan Freitas fought five times to conquer the gold medal. He beat Moises Souza 2-0, Caio Caetano 2-0, Marcelo Pereira by referees decision and Pablo Lavaselli 2-0 in the semifinal. The gold medal match was a very close one against Yan Paiva. Freitas managed a narrow 1-0 lead on advantages for the win.

85kg – After competing in the middleweight ADKOM super match on Saturday, Charles Negromonte bounced back Sunday to claim the gold medal in his weight class. In four matches, he finished Alexandre Vieira, beat Matheus Souza 2-0 and finished Rafael Paganini in the semifinal. The gold medal match was a nail-biter with Charles going on a blitz in the final minute of the match to tie the score at 4-4 and beat Igor Sousa by one advantage.

94kg – In four matches, Luan Lima wrote his name in the pantheon of ADGS Rio champions. He beat Alexandre Lima 2-0, finished Cauê Rodrigues and beat Felipe Trovo 1-0 on advantages. The gold medal match was against Poland's Adam Wardzinski and a narrow 1-0 lead on advantages made Luan the new champion.

120kg – Patrick Gaudio made his way to the top of the podium in three matches. He first beat Gilmar Oliveira 5-0 and then outscored Victor Hugo Martins 2-0 in the semifinal. The gold medal match was short-lived, as Gaudio quickly found his way to Rafael Message's back to finish the match with a bow and arrow choke.

49kg – Mayssa Caldas is back on the top! After losing the final to Brenda Larissa in Los Angeles, Mayssa fought twice to reclaim her throne of queen of the 49kg weight class. She first beat Eliana Carauni 14-0 and then met Brenda in the final for a long awaited revenge. A 2-1 lead on advantages was the narrow edge Mayssa needed to win once again.

55kg – Ana Rodrigues needed one day of rest after her Queen of Mats campaign to defend her title of 55kg division champion since the ADGS Los Angeles. In three matches, she finished Milena Nascimento with a choke from the back and then beat Amal Amjahid 3-1 on advantages to reach the final. The gold medal match was a close one against Talita Alencar, but Ana built a 2-0 lead on advantages for the title.

62kg – Bianca Basilio finished the Abu Dhabi Queen of Mats in third place, but came back for more on Sunday. She first beat Luciane Silva 1-0, then beat Lysandra Sousa 5-0 and finally finished Ruth Cathen in the semifinals. The gold medal match put Bia against Luiza Monteiro in a rendition of the ADQOM semifinal match. A foot lock gave Bia the title.

70kg – Thamara Ferreira is still the queen of the 70kg weight class. She fought three times to win her second gold medal of the season. Thamara first beat Renata Marinho 4-0 and finished Melissa Cueto in the semifinals. The gold medal match was short-lived as Thamara found an armbar to finish Larissa Dias.

95kg – Competing in front of her family and teammates, Gabrieli Pessanha was able to stay on top of her division. In three matches, she first beat Karla Albuquerque 7-0 and then outscored Yara Nascimento 4-2 in the semifinals. The gold medal match was a close one and Gabi took the gold medal home with a referees decision win after a 4-4 tie on points.

The 2019/2020 season of the Abu Dhabi Grand Slam Tour now moves to Abu Dhabi on January 16-18, 2020. The registration period is already open. Click here for more info. Relive the thrills of the ADGS Rio on Instagram at @ajptour and @jjwplus.