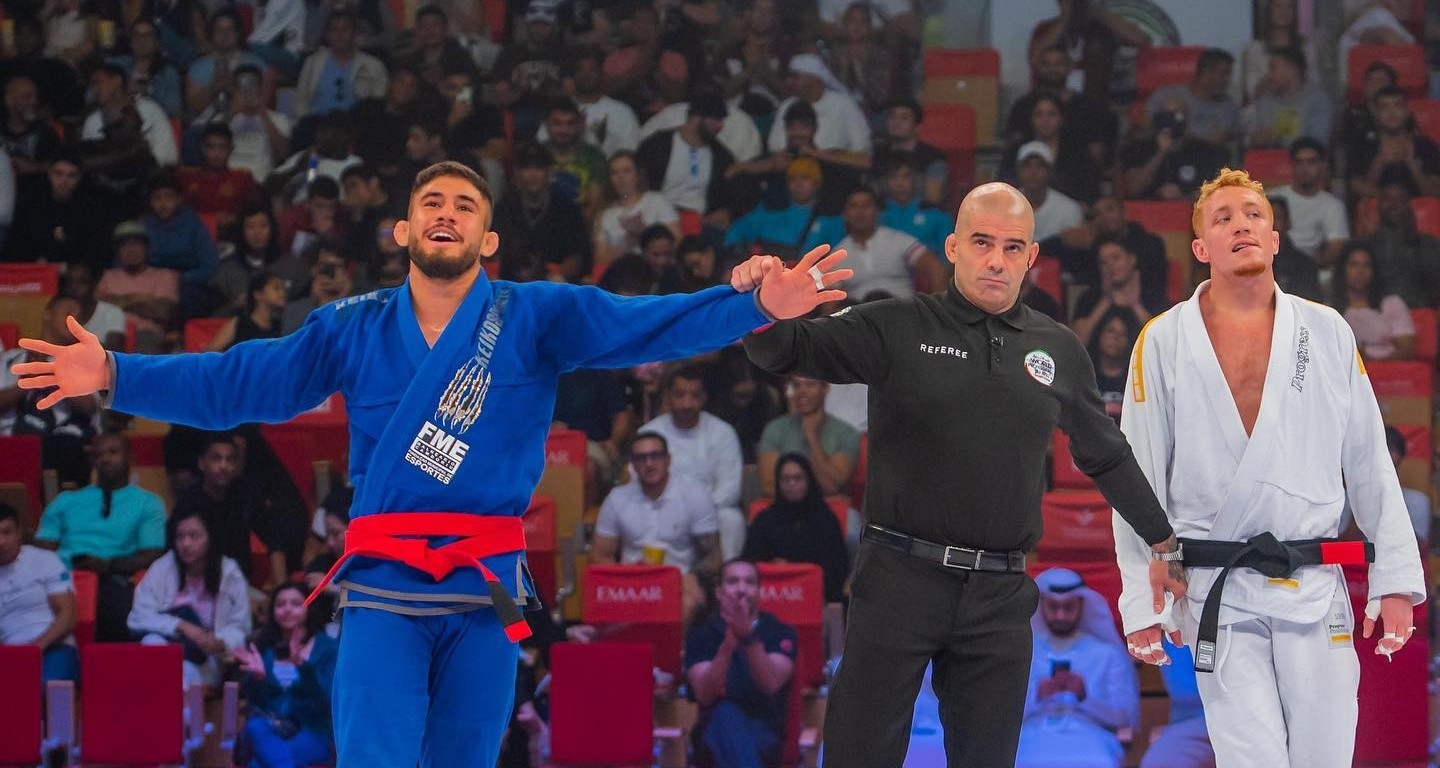 With five thousand competitors from over 100 countries, the most important championship from the AJP calendar is already down in history. On its last day this Saturday, November 19th, the AJP Abu Dhabi World Professional Jiu-Jitsu Championship 2022 crowned the best athletes among the elite of our sport. Before that, the division finals had the audience on the edge of their seats in the humongous UAE-based Jiu-Jitsu Arena.

Well-known champions and new faces that promise to shake up the competitive scenario of Jiu-Jitsu mixed in the highest spot of the podium, in the male black belt category and the female brown/black category. Among the highlights, we've had a spectacular turnaround from Gabrielle Pessanha in the 95kg final; Another success for Lucas Protasio, 77kg champion and number one on the AJP global ranking; and Zayed Alkatheeri, division champion at 59kg and the first UAE athlete to get the gold on the Adult category of the ADWPJJC.

See below how each final went down! Zayed and Nathannael made a very strategic duel. After five minutes of fighting with intense grab disputes and attempts at opening the game, the bout went to the golden score, but the balance between the competitors was such that the result came from the referees. In the decision, the Emirati athlete Zayed Alkatheeri kept the gold medal in his homeland. The young Meyran Maquiné was on a roll throughout the tournament. After shining in the Thursday qualifiers and taking the spot in the finals on Friday, Meyran faced Omar Alfadhlik, from UAE. The Brazilian Meyran started the fight climbing from the double pull to stay ahead on the score by 1 to 0. Omar did a good job with his guard, but Meyran managed to pass with a quick movement and made it 4 to 0. As if this wasn't enough, Meyran made a beautiful move with the lapel to take Omar's back, attacking with a rear naked choke and shifting for a back choke with the collar, with little more than two minutes for the end of the match. A more than deserved gold medal in a commendable campaign for the young Meyran. The Brazilian Raimundo Diego Sodré and the Argentinean Pablo Lavaselli fought an intense duel in the 69kg division final. Diego got up from the double pull and relentlessly attacked Pablo's flexible guard, who managed to contain his opponent. Pablo even found room to climb, but Diego went back on top with a footlock, landing two points for the sweep and another one for the attack on the foot. With the score at 4 to 2, Diego twisted around with a toehold and forced Pablo to spin out of the fighting area, ending the duel at 6 to 2 and crowning Raimundo as the new division champion. A Sweden athlete, Max began the match by pulling guard. Lucas quickly went to the side, tried to take the back, and ended up in Max's spider guard. The duel between the guard player and the pass player went on until the end of the regular time. In the golden score, Lucas avoided a takedown attempt from Max and made his final move, taking the legs and landing a double-leg takedown. World champion title and a spot on the top of the global ranking for the Brazilian. Fellipe Andrew Silva reached Aby Dhabi as one of the favorites of his division and confirmed that status at his duel against the Uruguayan Fausto Godoy. After the score settled in 1 to 1 for lack of combat on the double pull, the athletes once again traded pulls, with Fellipe staying on top. He then used his technique to reach the side, with the pass adding four points to his overall score. For good measure, Fellipe attacked again, this time on the foot. Fausto defended and a restless Fellipe pulled a magical double-leg takedown at the very last second, closing the score at 8 to 1. The Brazilian Catriel Rodrigues and the Portuguese Bruno Lima fought in the penultimate final of the ADWPJJC 2022. Bruno began the match by pulling guard, which prompted Catriel to move to the side and almost pass, reaching his opponent's back with only one of the hooks in place. Bruno put his skills on display and managed to avoid both attacks, but the attempts landed Catriel two points. Now it was Catriel's turn to pull. Bruno tried to turn and pass, but Catriel matched his movements using a lasso guard, going on top and getting pulled into Bruno's guard. With five seconds left on the clock, Bruno had a big moment where he tried to use a hook sweep on Catriel, but the Brazilian used his hips to weigh down the move and stay on top, landing him the title of division champion. At the ADWPJJC 2022's last fight, the ultra-heavies Yatan and Justin clashed in the central mat. The Canadian Justin pulled guard, but Yatan wasted no time in sticking his body to the opponent's and putting pressure to pass, landing three points with little more than two minutes of the duel. Justin pulled again but fell prey to another guard pass and ended with Yatan's knee on his stomach. 8 to 0 for the Brazilian. At the end of the bout, Yatan tried but found no success in his signature submission, the Nutcracker, getting only one point for his effort. 9 to 0 and a gold medal for Yatan Bueno. Brenda started off with 2 to 0 by getting up after a double pull and working on top of the half guard. On the other hand, Margarita took advantage of an opening to go on top and attack the leg, reversing the roles and tying the score. Pulling guard, Brenda managed an attack with a toehold, which didn't end in a submission but granted the Brazilian one point for the attack and two for going on top. With the score settled at 5 to 2, Brenda managed to stay on top during the fight and avoid Margarita's attacks, landing another ADWPJJC title on her roster. Representing Germany, Rose El Sharoune showed her Jiu-Jitsu to the world in a tangled match against Brazilian Ana Rodrigues. At the beginning of the duel, Ana went up from the double pull to open the score. After fighting closely throughout the bout, Ana managed to pass the guard, take the back, and attack with a bow-and-arrow choke that landed her the division title. Crowning a spotless season, Julia Alvez began her ADWPJJC final with a powerful takedown, opening the score at 2 to 0. Putting a lot of pressure on her guard passing game, Julia ended up making enough room for Emily Fernandez to go on top, which Julia tried to counter by pulling guard. The American Emily tried ceaselessly to unravel Julia's guard, which shifted between lasso and spider, until the Brazilian got up, tried a takedown, and got enough space to go for the back and attack the arm. In the score, only one point was awarded to Julia for the armlock that didn't end in a submission, landing it at 3 to 0. Emily tried a new blitz to pass, but Julia almost managed another sweep, settling the score at 4 to 0 and taking both the tournament gold and two prizes in the ranking as the AJP's best female athlete. An intense duel between Izadora and Denise. In the beginning, after the double pull, Denise went on top and scored a point, but Izadora quickly paid back, sweeping and putting the score at 2 to 1. Izadora then went hastily to the side, landing only one point for not stabilizing. The blitz went on as the Brazilian almost took the back and attempted a bow-and-arrow choke, putting the score at 5 to 1. Izadora even tried to attack the arm but ended up below her opponent, where she once again swept and settled the score at 7 to 1 to take the division title. Gabrieli and Giovanna made one of the most intense battles of the event. The brown belt Giovanna made the first moves of the match by pulling guard, sweeping, and putting pressure to get a pass. Gabrieli managed to avoid the attacks that were coming from above, put in a 50-50 guard, tangled up in Giovanna's legs, and went on top with a lot of strength in the grips, tying the score at 2 to 2. Giovanna tried to climb back again, but Gabrieli managed to avoid it and keep her opponent on the ground to win the duel and take her fourth ADWPJJC title.

For a full recap of the week of great fights of the ADWPJJC 2022, click here and watch agani!