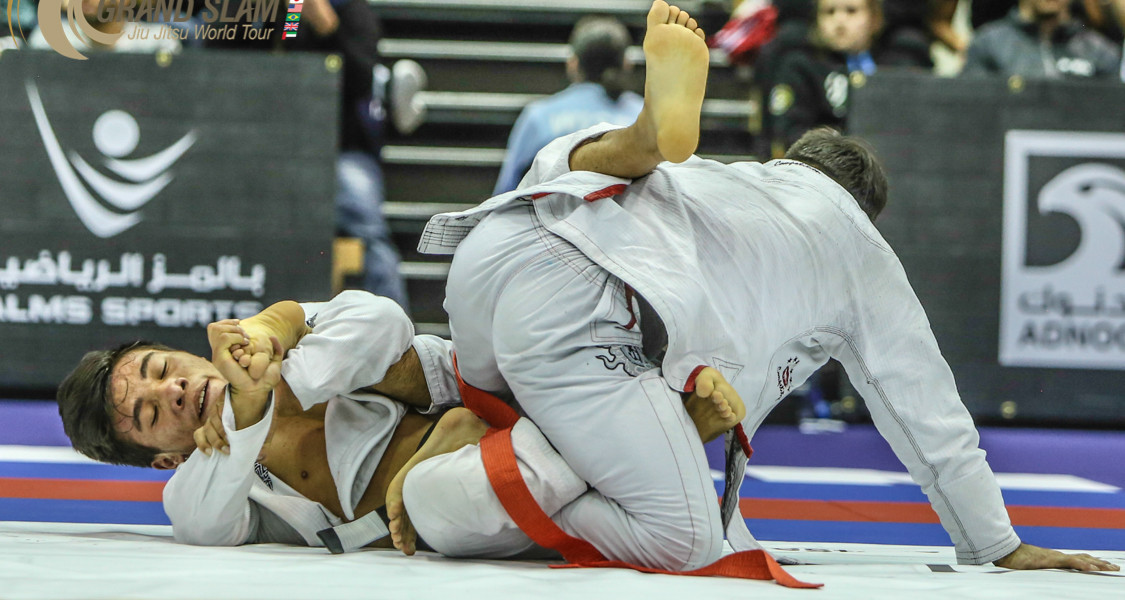 The 2018/2019 season for the black belt division in the Abu Dhabi Grand Slam Tour is over. The final competition day took place this Saturday, March 9, in London, England. It was a day like no other for the crowd in the Copper Box Arena and also for those watching all over the world. In some weight classes, new champions were crowned while reigning champions kept their crowns in other divisions. Here's how each weight class played out.

Carlos Alberto de Oliveira is still at the top. He fought only once to retain the title in the division. Japan's Nobuhiro Sawada made it to the final with a 6-2 win over Frederico Guimarães. In the gold medal match, Bebeto was able to sweep twice to secure another gold medal in the season.

By far the weight class with the most fierce rivalry between the two finalists. João Gabriel Sousa made it to the final through the hard way. He first finished Cleber Fernandes with a choke from the back to meet up with João Miyao in the semifinals. A 1-0 lead on advantages after a 4-4 tie on points was the edge that took Sousa to the final. On the other side, Hiago George finished Pedro Clementino from the back and then outscored Fernando Soares 3-0. The gold medal match was fast paced and Sousa and Hiago went head to head until the very end. One penalty for Hiago gave Gabriel the title after a 4-4 tie on points.

Paulo Miyao had a tough campaign to retain his title in the weight class. He first finished Alex Jablonski with a choke from the back to reach the semifinals and outscore João Gonçalves 2-1 on advantages. Isaac Doederlein also had a rocky road to the gold medal match. He first caught Max Campos with a triangle and then finished Tiago Bravo with a foot lock. The gold medal match was thrilling and decided by tiny details. Miyao secured the title with a 4-2 lead in a match that could go either way.

The most crowded weight class of the program had thrills for all. Sweden's Max Lindblad had a brilliant run to reach the top of the podium. He first beat Tommi Pulkkanen 2-0 to move on to the semifinals after not needing to compete in the quarterfinals. Another 2-0 lead on Pedro Ramalho took Max to the final. On the other side, Guilherme Rocha fought three times to reach the final. He beat Fabricio Barbarotti 2-0, then outscored Martin Aedma 1-0 on advantages and finished David Zaken with a triangle. The gold medal match was very close and Max eventually was able to build a 4-2 lead to secure the gold medal.

Lucas Barbosa is another reigning champion that kept his crown. In two matches, he first beat Maciej Kozak with an armbar to reach the final. His opponent would be Charles Santos, who beat Igor Sousa 1-0 on advantages. The gold medal match was decided early on with Barbosa managing a takedown and a guard pass to build a 5-0 lead over Charles.

Kaynan Duarte is back. He fought twice to win the title in the weight class. His first match was against Felipe Mussolino in the semifinals, won with a 4-0 lead. The opponent in the gold medal would be the defending champion Adam Wardzinski, who beat Matheus Godoy 9-2 in the other semifinal. The title was decided with a toehold as Kaynan was able to impose his game on Adam and take the gold medal home.

Ricardo Evangelista fought once to claim the title in the heaviest weight class. His opponent in the final was Helton Junior, who got there with a referee decision win over Rodrigo Ribeiro. The final was decided by a 3-1 lead on advantages in favor of Evangelista.

Ana Rodrigues is another new face on the top of the podium. In two matches, she first beat Gabriela Fetcher 1-0 on penalties. Rose El Sharouni made it to the final with a 6-0 lead on advantages over Laura Peretti. The gold medal match was short-lived as Ana found a choke from the back to win.

For the pleasure of the home crowd, Ffiona Davies had an outstanding performance to claim the gold medal. She first finished Suvi Koikkalainen with a rear naked choke to meet the defending champion Bianca Basílio in the semifinals. Ffiona was able to build a 8-0 lead to make it to the final. On the other side, Larissa Paes finished Michele Oliveira and met up with Charlotte Von Baumgartten in the semifinal, which she won via referee decision. In the final, Ffiona built a 11-4 lead with a guard pass and mount to take the gold medal home.

Four gold medals in five events in the season for Thamara Silva. She first beat Martina Gramenius 14-2 and then finished Magdalena Loska with a toehold in the semifinal. Samantha Cook made it to the final also in two matches, finishing Jesmine Latrach with an omoplata and then catching Vedha Toscano with a toehold. Thamara found a toehold to finish Samantha in the final and celebrate one more title in the season.

Gabrieli Pessanha did it all. She is the only athlete to have won the title in her weight class in all five events of the ADGS season. In London,. She fought once to quickly beat Marta Szarecka with a choke from the back in the final.

The final weekend of the Abu Dhabi Grand Slam Tour season completes this Sunday, March 10, with the lightweight bracket of the Abu Dhabi King of Mats. Ten of the best competitors in the world will fight for the ultimate glory. The action kicks off around 3PM (London time). Click here for more info. Follow the complete coverage on Instagram at @adwjjt. Watch the matches live on FloGrappling.com.