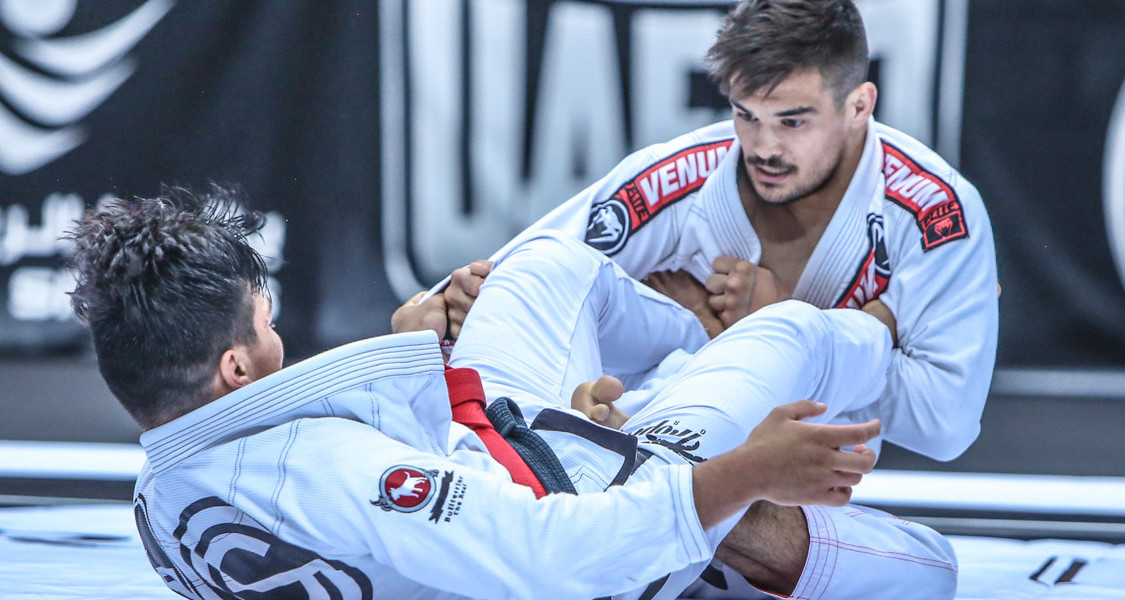 Abu Dhabi King of Mats: Merciless Isaac Doederlein finishes four out of five opponents on his way to the lightweight title in Tokyo

Isaac Doederlein ran the show this Saturday, July 27, in Japan. The American black belt was determined to not allow anyone else to walk away with the first place trophy in the Abu Dhabi King of Mats Lightweight Bracket. In five matches, Isaac finished none less than four opponents, including Gabriel Sousa in the big final. It was a performance for the books.

“It's all about hard work! I believe that to be the best you have to go through phases and build your game until you are able to put everything together. After years on the mats, I am now able to do just that and that's exactly what happened today,” said Isaac after the final triumph. Here's how the 8-men bracket played out at the central mat in the Ota Gymnasium, in Tokyo.

Gabriel Sousa came out strong in Group A to open the event but had his hands full against South Korea's Wanki Chae, beat with a 2-1 lead on advantages after a 0-0 tie on points. Round 1 in the group closed with Cleber Fernandes putting Japan's Nobuhiro Sawada in a leg lock to debut with a win.

Group B opened with Isaac Doederlein coming out of the gate full throttle. An armbar on Thiago Macedo put an end to the match. Diego “Pato” Oliveira had a lot more trouble in his debut against Japan's Tomoyuki Hashimoto. A 2-1 lead on advantages was the narrow edge that gave Diego the win.

Gabriel Sousa came back for his second match in the group, but this time he picked up the pace to catch Cleber Fernandes with an armlock for the finish. Wanki Chae bounced back from his first round defeat with a 4-2 win on points over Nobuhiro Sawada.

On Group B, Isaac Doederlein almost got the finish with an armbar, but time ran out on him and the black belt under Rubens Cobrinha had to settle for a 3-1 win on advantages over Diego Pato. The group closed round 2 with Thiago Macedo finding a choke from the back on Tomoyuki Hashimoto for his first win in the bracket.

Isaac Doederlein easily made it to the semifinals as leader of Group B after he finished Tomoyuki Hashimoto with an armbar. The final spot in the semifinals landed with Diego Pato after a 4-2 win on points over Thiago Macedo in a thrilling and close match.

The first semifinal was one of those odd matches Jiu-Jitsu fans witness from time to time. Very early in the match, Isaac Doederlein managed to reach a position to finish Cleber Fernandes with an armbar. Not willing to give up, Fernandes held on to his arm and made Isaac really work for the finish. After nearly five minutes, Doederlein finally was able to break Cleber's defense and get the finish to qualify for the final.

If you blinked, you missed some key moment of the action. Sousa and Oliveira stepped on the gas and had a very fast-paced match. The thrills kept coming with near back takes and near guard passes from side to side. In the end, a 4-2 lead for Sousa put him in the final while Diego went on to fight for the third place.

At one point of the third place match, the crowd could almost feel Diego Pato's pain as Cleber Fernandes attacked his already injured right ankle. The newly promoted black belt showed a lot of heart not to tap on that foot lock, and he didn't. More than that, Diego was able to build a 4-2 lead and ultimately win the third place and a much deserved ovation from the crowd.

The last time Isaac Doederlein was in a final match of the Abu Dhabi King of Mats, a split referees decision in favor of Paulo Miyao took away his dream of reaching the top step of the podium. This time, in Tokyo, Isaac left nothing for the referees to decide. After a sweep for each, Isaac was able to find a nice foot lock setup that gave Gabriel no other alternative than to verbally tap as his ankle was attacked. A new champion is on scene and Isaac is now on deck to face the winner of the lightweight belt match between Paulo Miyao and Leonardo Saggioro, scheduled for the Abu Dhabi Grand Slam Rio, this coming November.

The weekend of Jiu-Jitsu continues this Sunday, as the Abu Dhabi Grand Slam Tokyo returns to the Ota Gymnasium for the male and female divisions in the purple, brown and black belts. Follow the complete coverage on Instagram at @ajptour and @jiujitsuworldmag. Watch the matches live and find the full results on the event's page (https://ajptour.com/en/event/190).