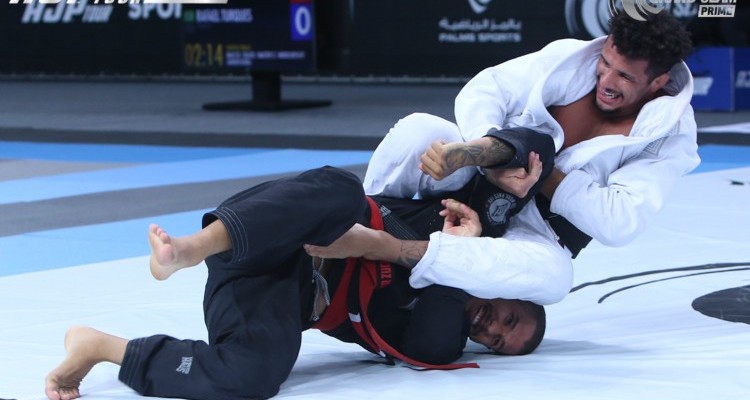 Day 2 of the Abu Dhabi Grand Slam Rio had all the ingredients Jiu Jitsu fans love. High level matches, thrills from beginning to end and top notch organization turned the ADGS Rio into the event to be in Brazil in 2020.

This Sunday, December 6, was devoted to the black belt division in the masters 1 and 2 and the adult. The mats at the Arena Carioca saw a parade of returning champions, but also a stream of competent first time winners that feared nothing on their way to the top.

Light-featherweight (56kg) – In a close final, Francisco Jonas Andrade caught Diogo Reis in a triangle in the very last seconds of the match. Reis bravely resisted, but it was enough for Jonas to win an advantage that tied the match at 1-1 and gave Jonas the title for scoring last.

Featherweight (62kg) – Meyran Maquine controlled the gold medal match against Fabricio Andrey to build a 4-2 lead and secure the title in the division.

Lightweight (69kg) – Gabriel Figueiro came from behind in the scoreboard to sweep Israel Almeida and win the gold medal with a 2-1 lead.

Welterweight (77kg) – In another very close gold medal match, Lucas Nascimento and Yan Paiva stayed on their feet for almosr the entire five minutes. In the end, Nascimento won the title via referees decision following a 0-0 tie.

Middleweight (85kg) – Wellington Sebastião went ahead 1-0 in the scoreboard early in the gold medal match. That lead was enough to secure the win over Matheus Spirandelli and the gold medal.

Light-Heavyweight (94kg) – Guttemberg Pereira had total control of the division. In the gold medal match, he had a great performance and comfortably built a 8-0 lead over Rider Amaral to secure the gold medal.

Super-Heavyweight (120kg) – Wallace Costa was another new face reaching the top of the podium in Rio. He secured the gold medal with a 7-0 lead over Igor Schneider in the final. Roosterweight (49kg) – In the first big upset of the afternoon, Maria Eduarda Ono played a very smart game against Brenda Larissa and managed to secure the title via referees decision after a 0-0 tie.

Light-Featherweight (55kg) – In a duel between two big names, Bia Basilio played safe and managed a early 1-0 lead over Amanda Monteiro. As the clock struck zero, Bia was able to celebrate another gold medal in the AJP Tour.

Lightweight (62kg) – In a short-lived gold medal match, Julia Alves was able to catch Ivhalaynie Meira with a triangle to secure the title.

Middleweight (70kg) – Another huge upset had Julia Boscher as protagonist. With a 2-1 lead, she became the first competitor to beat Thamara Ferreira in the weight class. The gold medal match was intense and decided only after the video referee.

Heavyweight (95kg) – Another round in one of the most fierce rivalries in Jiu Jitsu today. Gabrieli Pessanha and Yara Nascimento once again waged a close match that came to the final seconds as close as it gets. In a great effort, Gabi worked on a sweep and was rewarded with a 1-0 lead that meant the title. Gabi remains the ruler of her weight class in the AJP Tour.